$pringfield (Or, How I Learned to Stop Worrying and Love Legalized Gambling)

$pringfield (Or, How I Learned to Stop Worrying and Love Legalized Gambling)

I will not say 'Springfield' just to get applause

Gerry Cooney as himself
Robert Goulet as himself
Phil Hartman as Troy McClure (credited; but no lines)

“Remember when I let that escaped lunatic in the house because he was dressed like Santa Claus? Well, you have a gambling problem.”
―Homer to Marge

"$pringfield (Or, How I Learned to Stop Worrying and Love Legalized Gambling)" is the tenth episode of Season 5.

During a town meeting, Principal Skinner pitches the idea of opening a casino. Mr. Burns adopts this notion and builds the "Mr. Burns' Casino." Homer takes a job as a blackjack dealer and Marge takes up gambling. At home, Lisa is having difficulties with her school project and Bart opens a treehouse casino.

The economy of Springfield is in decline, and Mayor Quimby listens to suggestions from citizens on how to improve the economy. Principal Skinner suggests that legalized gambling has helped rejuvenate run-down economies, and that it can work for Springfield as well. Everybody likes the idea (including Marge, despite everyone's initial belief that she would protest against it) and they agree to it. Mr. Burns and Mayor Quimby work together to build a casino, but Burns objects to several prototypes until he develops his own design: Mr. Burns' Casino, with "sex appeal and a catchy name".

At the house, Lisa tells Marge of an upcoming 50 US States pageant at Springfield Elementary School. Marge suggests she goes as Nevada in honor of the legalized gambling in both the state and Springfield. Lisa objects and Marge suggests Florida since she loves orange juice and old people like her. 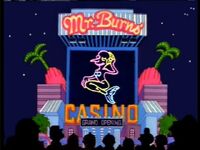 The casino opens, and Homer gets a job as a blackjack dealer, a popular one at that since he is so bad at it that everyone at the table always wins except him. Also visiting the casino are Marge and Bart. Bart wins a jackpot, but is kicked out, as minors are not allowed in American casinos, unless accompanied by a responsible adult. Bart says the casino was stupid anyway and a squeaky voiced teen laughs, sarcastically telling Bart to build his own casino. He does open a casino in his treehouse, featuring Milhouse and Jimbo as entertainers. Marge shows up while Homer is doing blackjack duties and Homer thinks that it is strange that Marge is at the casino after her negativity towards it, but it's all in Homer's head as Marge was OK with the idea (it's possible that Homer sees her as an instant killjoy and preconceived this notion). Then, while Marge waits for Homer's shift to end at Burns's casino, she finds a quarter on the floor and uses it to play a slot machine. She wins and almost immediately becomes addicted to gambling, soon becoming a slot-jockey. Meanwhile, while Burns's casino is a roaring success, Burns becomes even more reclusive and eccentric, as he has found the one industry even more profitable than the energy business. Only one thing can stop him - microscopic germs. He becomes a germophobe, stops cutting his hair and nails, and forces Smithers to wear a hospital gown to protect him from germs.

Due to her addiction, Marge spends every waking moment at the casino and neglects the family in the process. Maggie crawls away from her, and is almost mauled by the Tigress Gemima, with Barney Gumble barely snatching her up in time. However when he returns her to Marge, Marge just places her back down and returns to the slots, and Barney hypocritically comments on her impulse control problem, just before drinking some quarters, thinking they're beer.

Back at home, when Lisa wakes from a bad dream of the boogeyman, a gun-toting Homer hides himself and the children behind a mattress in terror, shooting from his cover at anything he thinks might be the boogeyman. When Marge finally returns home and sees what has happened, she promises to spend more time with her family instead of gambling. The next day, Bart intercepts Robert Goulet to perform at his casino, when he was hired to perform at Mr. Burns's casino; Goulet is a hit, singing the children's favorite "Jingle Bells, Batman Smells" and accidentally smacking Milhouse in the face with his microphone, and rather enjoys himself.

As an addict, Marge quickly goes back on her promise and returns to the casino. She does not help Lisa make a Florida costume for her geography pageant, so Homer makes a primitive costume of "Floreda" for her (which is not just misspelled, it is also shaped like California). Lisa is heartbroken, thinking she looks like a monster, but Homer swears he will save Marge from the real monster (whom he calls Gamblor) even if he must drag her out of the casino and force her to return home.

Back at Burns's casino, Mr. Burns has mentally degenerated, wearing Kleenex boxes on his feet and designing a plane called the Spruce Moose. Smithers admires what appears to be a scale model of the plane, but Burns insists that it is the full-sized version. Homer bursts into the casino and barges around searching for Marge. (Interestingly, while Homer's rampage is supposed to be destructive, every thing he passes by causes players to win jackpots.) The security cameras capture Homer's rampage, and when Burns sees him he orders Homer to be fired. Smithers promises to send Homer back to the power plant. Realizing how much he misses the plant, Burns chooses to return and orders Smithers to prepare a shave and get rid of the Kleenex boxes, although he plans to hang on to the jars of urine he has been preserving. Planning to fly back to the plant, he orders Smithers to board the model plane... at gunpoint.

Homer spies Marge who is gambling and winning more money. With that, he stops her by pulling Marge away from the slot machine and throwing it to the floor. Homer proceeds to tell her how angry he is at her for breaking her promise to Lisa and making her cry. Marge realizes how much her neglect is effecting her family and apologizes. Homer persuades Marge to admit that she has a gambling problem, and she considers therapy, but Homer objects, claiming that it's too expensive.

At Springfield Elementary, Lisa, along with Ralph Wiggum, who dressed up as Idaho using nothing but a sheet of loose leaf paper that says "Idaho" taped to his shirt, both receive special awards for being "children who obviously had no help from their parents".

Homer then rubs it in Marge's face and tells her that her gambling addiction was worse than his flaws. She is offended and tells Homer that he is supposed to be helping her, not rubbing it in. Homer tells Marge this is what she gets for neglecting their family and breaking her promise in helping Lisa make her Florida costume. He eventually agrees to let it go as long as she makes the effort to stop heading back to the casino.

In its original American broadcast, "$pringfield" was watched by eleven million households. The episode was the highest-rated show on the Fox network that week. Since airing, the episode has received mostly positive reviews from television critics.