Great-Great-Grampa Simpson
Oswald J. "Old Tut" Simpson was the eldest son of Abraham Simpson I and the husband of "Happy" Dinsdale. They had five children, named Orville, Bonita, Elrita, Twitta and Boris.

He may, depending on the accuracy of Abe's story in The Color Yellow, be ¼ black, making him a quadroon.

According to Much Apu About Nothing, he was born in the old country (possibly in Scotland).

In "Homer to the Max", Abe claims that he traded a mule for the Simpson name, and that that mule went on to save spring break. This is clearly one of Abe's wildly inaccurate, inconsistent stories due to his dementia, as generations prior to Old Tut already had the Simpson name. That being said, it is possible that Old Tut simply traded the mule to get his surname back, much like how his great-grandson Homer gets his surname back in the aforementioned episode.

Tut made his first physical appearance in a flashback in A Father's Watch. This depicts his son, Orville, as a "professional child beater", to whom fathers come to for disciplinary advice. Tut was unimpressed with his son's disciplinary methods and strangled him in response.

"Old Tut" as he appeared in "A Father's Watch". 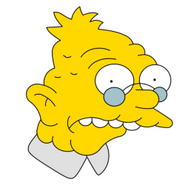 "Old Tut" as he appears in The Simpsons Uncensored Family Album.
Add a photo to this gallery

Retrieved from "https://simpsons.fandom.com/wiki/%22Old_Tut%22_Simpson?oldid=904133"
Community content is available under CC-BY-SA unless otherwise noted.