Üter Zörker is an obese exchange student from Germany.

Despite not being fully characterized, and obese, Üter is a good-natured boy. He has a huge passion for eating unhealthy food, especially chocolate and candy, and can often be seen alone eating sweets, both at school and on the school bus. In a Treehouse of Horror segment, he actually ate flavored wax.

It is an ongoing joke during the series that he is dead, though his death has not been canonically confirmed, similar to South Park’s Kenny McCormick.

He is a player on the Kwik-E-Mart Gougers Peewee Hockey League Team. Üter also enjoys flirting with Lisa Simpson and sometimes tries to befriend Bart. He enjoys watching German football and also seems to be a sci-fi enthusiast; as he was seen attending the Bi-Monthly-Science-Fiction-Convention.[1]

Üter once got left behind on the American Civil War field trip and subsequently went missing, as the class was forced to abandon him when the Civil War re-enactment actors at Fort Springfield were in hot pursuit of the party after busting them for attempting to "learn for free". His parents demanded Skinner to inform them of their missing son's whereabouts[2]. However, he has since reappeared in episodes after "The PTA Disbands" and before being mentioned in "Guess Who's Coming to Criticize Dinner?", which could be a continuity error. He was once seen stuck in a cobweb in the school air vents [3]. Üter then reappeared some time afterwards.

It is mentioned that he has a crush on Janey Powell.

Üter has two parents, and an uncle who is the proud owner of a bubblegum factory in Düsseldorf.

The name "Üter" is a neologism (invention) of the Simpsons world and probably a misconstruction of the German name "Günther". He speaks with a thick German accent. The Lederhosen he wears are more typical of Bavaria rather than of Germany as a whole.

He is one of the few characters that debuted in a Treehouse of Horror series episode to actually be integrated into canon.

In the German version of the show, he is named "Uter", his nationality was changed from German to Swiss and his uncle's bubblegum factory is located in Basel. He speaks German with a thick Swiss-German accent and has a characteristic love of chocolate.

Uter among the BRA crying in pain

Uter gets eaten by Homer 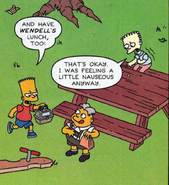 Üter in the comics

Üter as "The Candy Man"