Simpsons Wiki
Register
Don't have an account?
Sign In
Advertisement
in: Vehicles in Simpsons Hit & Run, Stubs, Cars,
and 4 more

“This is Agent Johnson from the FBI. Be on the lookout for a 1936 maroon Stutz Bearcat!”
―Agent Johnson
“Ehh, that was really more of a burgundy.”
―Chief Wiggum[src]

"The Trouble with Trillions"

The 1936 Stutz Bearcat is an Italian car owned by Mr. Burns. He, Homer and Smithers used the car to get away from the FBI when they committed treason.

Burns uses it to escape with his Trillion Dollar Bill. He abandoned the car after escaping to Cuba.[1] He later used this to drive around the city during his scavenger hunt.[2]

The Stutz Bearcat is one of the many vehicles in The Simpsons: Hit and Run.

The Stutz Bearcat in Hit and Run. 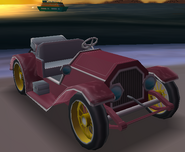