After The Walt Disney Company acquisition of 21st Century Fox was completed on March 20, 2019, TCFHE are now operated as a subsidiary of Walt Disney Studios Home Entertainment as they will distribute future Fox movies and tv show releases under TCFHE banner, starting with X-Men: Dark Phoenix, while TCFHE are still currently acted as a home media distributor of MGM Home Entertainment and Annapurna Pictures.

Starting in late 2006, the company began releasing its titles on Blu-ray. 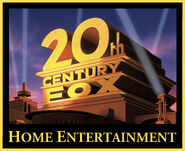 Retrieved from "https://simpsons.fandom.com/wiki/20th_Century_Fox_Home_Entertainment?oldid=893767"
Community content is available under CC-BY-SA unless otherwise noted.