744 Evergreen Terrace is the address of the house where the Flanders family live. They live next door, to the left, of the Simpsons, at 742 Evergreen Terrace. The house was destroyed by a hurricane which makes it the only house in Springfield to get destroyed by the hurricane, but was rebuilt (shoddily) by the citizens of Springfield, including Homer Simpson shortly thereafter, and also collapsed afterwards, which resulted in Ned Flanders having an intense outburst of pent-up rage in Hurricane Neddy.

The house is a two-story detached house with a connected garage. The house itself is pink-purple in color, with red window frames and a blue-orange canopy above the front-door. Inside the house, most if not all the rooms include religious imagery and photographs of Maude Flanders. The house is well furnished with expensive-looking furniture, which Ned claims he buys cheaply because it used to be "evidence from a murder trial". The layout of the house appears to be similar to that of 742 Evergreen Terrace, with two front rooms and two back rooms. The basement of the house has been converted to a 'rumpus room', with a bar and snooker table (oddly since Ned later confesses to being a teetotaler). The house also has a panic room and a secret room stashed full of The Beatles merchandise, which would be later smashed up by Bart and Milhouse. The Flanders' residence once had a bomb shelter in the backyard, but this was destroyed by a small meteorite. The Flanders have a satellite dish but lock out 230 of the channels it offers. It is implied the only channel not locked out is one which airs Christian programming for children. The Flanders also have air conditioning, which Homer steals in one episode, in order to gain relief from the heat. Ned, Rod and Todd sleep upstairs. Rod and Todd share bedrooms, and there is also at least one spare bedroom where Bart Simpson slept when he was younger, which Ned later rents out. The garden of the house includes a patio and a barbecue and is often used for Ned's barbecue and birthday parties. (Note: Although the house is generally labelled 740, in one episode it is at number 744 Evergreen Terrace, and in another episode 738 Evergreen Terrace, and since very early episodes of The Simpsons had 742 Evergreen Terrace at different numbers, it is reasonable that 740 Evergreen Terrace used to be different as well). 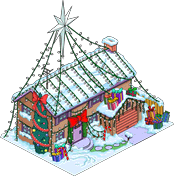