Gordon Shumway (more commonly known as ALF) is an alien and the main character of the eponymous sitcom, ALF.

Alf appeared in the cover for Us magazine in the 80's.[1]

He was in a lineup of other aliens, which Homer had to pick the alien he saw.[3]

He was supposed to appear at Bi-Mon-Sci-Fi-Con, but never appears.[4]

Homer tries to hit a spider using an old TV Guide, which has Alf in the cover and has the caption "ALF hates Victoria Principal".[5] 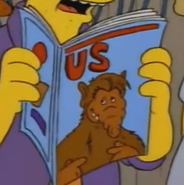