Abbey is the daughter of Edwina, a woman with whom Abraham Simpson briefly had a relationship while he was stationed in England during World War II.

It is insinuated that Abbey is the result of that relationship, which would make her Abe's daughter and Homer's half-sister. She very much looks and acts similar to Homer.[2]

Abbey was the result of a brief relationship between Edwina and Abe during the Second World War.

Abe was in England before D-Day and had one night of passion with Edwina before he had to leave England. Unknown to Abe, Edwina became pregnant and the result was Abbey. Abe and the rest of the Simpson family first met Abbey when she was 58 years old.

They had been visiting England and were on their way to catch their plane back to America, and Edwina and Abbey approached them in the airport.

When Abe realized that Abbey was his daughter due the resemblance between Abbie and Homer, he ran off to the plane screaming, after saying "See you in Heaven."

While Abbey is obviously a biological Simpson (aside from her appearance and personality, she was born less than a year after Grampa's affair with her mother) she is not officially recognized by the family and never explicitly called a Simpson.

It is possible that even though she is female, Abbey may have somehow inherited the Simpson Gene defect that most of the Simpson males have.

As Dr. Simpson pointed out, all the Simpson women have high intellects and good careers, because the defective gene is on the Y chromosome.

This could be an instance of the gene skipping a generation or striking some and missing others, as her half-brother Herbert Powell also supposedly inherited the Simpson Gene, but it has not significantly affected him.

Abbey was voiced by Dan Castellaneta. She looks like a female version of Homer and they share similar mannerisms and personalities, such as obesity and drooling. 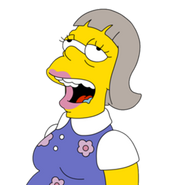 Abbey and her half-brother Homer

Retrieved from "https://simpsons.fandom.com/wiki/Abbey?oldid=896216"
Community content is available under CC-BY-SA unless otherwise noted.