Agnes "Kookie" Flanders (née Turnipseed)[1], also known as Mona Flanders[2] and Capri Flanders[3], (born 1910) is the mother of Ned Flanders and Nediana Flanders, the wife of Nedward Flanders, Sr. and also the paternal grandmother of Rod and Todd Flanders.

Agnes Flanders was a beatnik, revealed when a much younger Agnes and her husband were seen bringing Ned to Dr. Foster.[4] Although Ned Flanders is willing to help Agnes Flanders, he secretly hates her as well as his father, which he admitted when various psychiatrists attempted to trap him in a room with Homer to get Ned to admit to any kind of anger he may have felt that led to him suppressing it due to Dr. Foster's treatment backfiring.

Flanders once said, "Homer, you met my parents" (to which Homer replied, "Not naked I haven't", as she was naked at the time), an indication that they are still alive.[5] In Season 23, it is shown that she and her husband are alive, since they both attended Ned and Edna's wedding.

According to the Simpsons Comic "Granddaddy-o!" (printed in Simpsons Comics 204), Agnes and Nedward were Bleeding Gums Murphy's godparents.

Agnes Flanders when she was younger, as seen in "Hurricane Neddy"

"Oh, we had a paper, Nedward. We just rolled it and smoked it!" 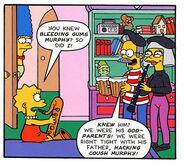 Ned and his parents in "Walking Big & Tall" 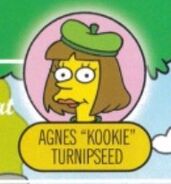