The Air Hostess is one of the female flight attendants for Air Springfield.

She tells Homer Simpson that he cannot put his suitcase away in the luggage compartment because it is full, but Homer ignores her advice and he still puts his suitcase away, despite it falling out of the plane.

Later, she tells Homer to return to his seat, but he says he needs the bathroom, but the Air Hostess refuses prevents him from using the bathroom and tells him that he should have thought about it earlier before drinking the fluids he needs to live. She then chases him down to the bottom of the plane along with two other flight attendants but gets tripped up in the process by an unnamed male passenger. 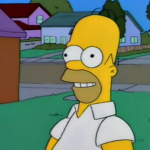