Kevin Michael Richardson
Albert (1992-2015) was the leader of an overweight group. He was an activist for fat people's rights. He died after standing up from his scooter because he was so fat and unhealthy, even though he was only 23 years old. He was so fat, his cremated ashes needed nine urns and a large sack to contain them.

Albert is suspended to a mobility scooter.

In the 'Big is beautiful' group, he has a stand for many objects:

Albert standing, shortly after, he dies. 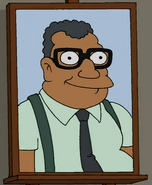 The Objects Albert has
Add a photo to this gallery
Retrieved from "https://simpsons.fandom.com/wiki/Albert?oldid=881409"
Community content is available under CC-BY-SA unless otherwise noted.