“Oh, yeah, like I'd be seen with a Discover card.”
―Alex Whitney

"Lard of the Dance"

Alexandra "Alex" Whitney is a popular "grown-up" girl in Lisa's class. Lisa becomes very jealous of her, because Alex steals her friends.

Alex is quite a "mature" girl for her age. She has a mobile phone, purse, credit card and enjoys dances. She pierces her and her friends' ears with the help of thumb tacks and a whole lot of paper towels. She enjoys shopping on credit and dating. Her favorite scent is Calvin Klein's Pretension and favorite drink is iced tea. She uses valley girl slang, which is mainly used by teenage girls. She mentions her parents are extremely rich. She always has lip gloss, perfume and a spare pair of platform shoes in her pink fuzzy back pack. [1]

She was seen lining up for a gymnastics class with Lisa, and joined a Tap Dancing school owned by Vicki Valentine [2].

In "Lard of the Dance", Alex Whitney is voiced by Lisa Kudrow, who acted as the role of Phoebe in the sitcom Friends. Coincidentally, she also tells Lisa at one point to "not be such a Phoebe", a reference to the character she portrays on Friends.

Most of Alex's appearances are brief, background notes. The episodes where she had an actual role are in bold.

Alex at the school party 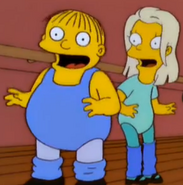 Alex on her cell phone.

Alex with brown hair
Add a photo to this gallery

Retrieved from "https://simpsons.fandom.com/wiki/Alex_Whitney?oldid=890089"
Community content is available under CC-BY-SA unless otherwise noted.