Lauren Tom
Amy Wong (born December 3, 2978 on Mars) is a fictional character of Futurama. She is the attractive, sexy, Chinese-Martian intern at Planet Express. She appeared in The Simpsons/Futurama Crossover Crisis and on The Simpsons episode "Simpsorama".

She has black hair and wears a pink hoodie, a gray wristband, pink pants, and magenta boots.

Amy was from Mars, but when she was older enough, she had to move to Earth. Wong can speak a bit of Martian.

She is one of Bart Simpson's friends. 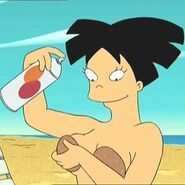 As she appears in Simpsorama
Community content is available under CC-BY-SA unless otherwise noted.
Advertisement