Santa's Little Helper jumps into the air catching a frisbee

Halle Berry as Herself
Russell Brand as Himself
Maurice LaMarche
Nick Park
Ricky Gervais as Himself
J.B. Smoove as DJ Kwanzaa

"Angry Dad: The Movie" is the fourteenth episode of Season 22.

Bart makes a short film based on the character Angry Dad that he created in "I Am Furious (Yellow)", (from Season 13), which soon becomes successful that it gets nominated for several awards, but Homer is taking all of the credit.

Coming back from a mere half hour trip to the yogurt store (where Homer forced the squeaky voiced teen to mix his tip jar into his serving) the family becomes furious when they see Bart has destroyed the house. Homer is about to inflict the usual strangling to Bart when they get a visitor named Herman Millwood, the owner of a chair company who took possession of BetterThanTV.com cartoons when the bubble popped to pay for the chairs. He also owns an animation studio and offers Bart a chance to make a movie out of Angry Dad. Bart accepts, and is taken by Millwood to film studio animators. Since the original voice of Angry Dad threw it out about never getting paid, Homer is offered to voice his self inspired character. He gets the role after he gets 'offended' by the walls of the office, running around the area, destroying several booths. Bart asks him, and he says "it would be AN HONOR!" The film's test screening gets applause... until the movie actually starts. Lisa convinces Bart to remove all of the parts the audience did not like, thus making the Angry Dad a short film. This proves to be a success and the film is soon nominated for a Golden Globe for "Best Animated Short".

At the ceremony, Angry Dad wins, however as Bart takes the stage and is about to speak, Homer then shoves him to one side, snatching away the award and taking all the credit for the cartoon's inspiration. Bart is comforted that this is only the first of many awards he will receive, but this comfort is short lived as Homer deftly hogs them all to himself, even scoring Bart's name out on Hollywood boulevard and writing his own. Angry Dad soon receives an Oscar nomination. Out of frustration against Homer for unnervingly hogging all the credit, Bart distracts Homer from going by making him and Marge go on an sightseeing tour in Los Angeles while he and Lisa go to the award show. However, Homer gets recognized by others who take him to the ceremony. Homer arrives in time to see Angry Dad win the Oscar. Bart goes up to accept the Oscar but as he does he realizes that it wasn't just his dad, or just him. He thanks Lisa for having the idea to make the film into a short film, the animation studio, and everyone involved. Touched by this, Homer apologizes to Bart for taking all the credit, and the two agree to cut up the Oscar and give a piece to everyone on the animation team. Bart asks if Homer had gotten a replacement. Homer confides to him that the Award is only five dollars on eBay, which Maggie is seen sucking on. 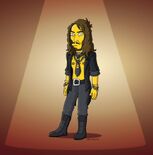 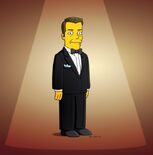 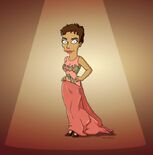 Executive producer Al Jean said it is "a bit of a satire of the different Oscar acceptances where two people clearly race to the stage to get there first, and Homer and Bart are fighting to be the one that accepts.