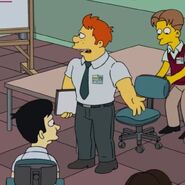 Angry Ricky was an intern at Springfield Nuclear Power Plant.

When Mr. Burns decided to fire Homer due to a post that Marge uploaded to a social media website, he decided to call Angry Ricky and two other interns, as his goons and Irish ruffians were unable to come because his goons were in Phoenix Arizona for their mindfulness seminar and his Irish ruffians were still laid up after eating the moldy soda bread. He confronted Smithers, saying to send his payment to Northwestern for summer credit.

Later in the episode, when Lisa was showcasing Conrad to Homer for the first time, one of the pictures shown was him tying a jacket in front of Lenny and Carl. According to the app, he lost his internship and his course credit because of that photo.