He, along with the rest of the octuplets are a result of fertility drugs taken by Manjula, after she and Apu decided that they wanted a baby. However, Apu and Manjula swiftly find they are not up to the task of raising eight kids all at once. After talking with Larry Kidkill, the octuplets are put in a nursery at the Springfield City Zoo, where they are put on display in a show named "Octopia", several times a day. After Apu and Manjula are displeased by this, he and Homer decide to break the children out of the zoo.

During Maggie Simpson's birthday party, Anoop is seen playing with Maggie in the sandbox, before Moe Szyslak snatches her away.[1]

While the octuplets are usually shown as a group, each of them can occasionally be seen involved in doing things apart from the rest of the octuplets. Some of Anoop's activities consist of:

In Future-Drama, Anoop is shown to be very bossy towards Bart Simpson, who works at the Kwik-E-Mart. After Bart mistakes him for Gheet, he calls him a "racist cracker" and kicks him in the head. He, along with Gheet, Uma, and Sandeep are seen wearing jet-packs. 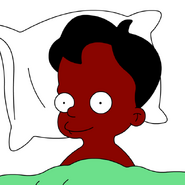 Anoop waves his arms around.

Maggie and Anoop playing in the sandbox.

Anoop after Moe yells at him.

Pria and Anoop hit each other.

Anoop as a child in "Future-Drama".
Add a photo to this gallery

Retrieved from "https://simpsons.fandom.com/wiki/Anoop_Nahasapeemapetilon?oldid=879601"
Community content is available under CC-BY-SA unless otherwise noted.