Everyone in Springfield (except Ned Flanders) have gotten fed up with the Simpsons' shenanigans, and banish them from town. The family settles in a deranged town, where they pick up new skills like Maggie hunting with a crowbar. Lenny and Carl miss the family and plan to visit them. Soon, the citizens rebuild Springfield where the Simpsons live now.

Homer and Marge, disguised as Mr. Burns and Waylon Smithers, sneak back in, presumably tricking Chief Wiggum in the process. They have a romantic night together then head to their old home where they go to bed. In bed, they hear Jimbo, Dolph and Kearney come in and are found out. Before the bullies can tell anyone, the police come to the house along with the rest of the town. Chief Wiggum tells Homer and Marge that he has seen through their disguises and pretended to be fooled in order to buy himself time to gather the residents together.

Homer and Marge make their way through the crowd, which parts to let them through, in a dismissive manner leaving the stunned onlookers in their wake. From their expressions, it is clear that the citizens of Springfield (with the exception of a dismissive Mr Burns) regret throwing the Simpsons out, especially Smithers, Lenny, Carl and Patty because they realize that the family accepted their sexuality whilst everyone else is against them.

Marge is finally settling into life in The Outlands until Lenny and Carl turn up. Bart and Maggie act hostile towards them, claiming they were part of the crowd who exiled them. Carl explains that after hearing what Homer and Marge said, they wanted a better life as well as a fresh start. Eventually, Moe turns up too, opening Moe's Cavern which they and Homer patronize at. After that, Mayor Quimby, and many other Springfield residents show up, wishing to abandon their lives in Springfield and start over in The Outlands. Soon, all of Springfield moves there to start new lives with the Simpsons and they begin rebuilding a new city. The man whom the Simpsons befriended chose to pack up and move further away from the townspeople. Eventually, Principal Skinner is the last person left in Springfield, until Bart rescues him in a wooden helicopter, crashing Skinner into several buildings and landmarks. 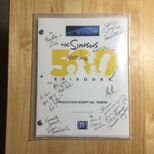 Retrieved from "https://simpsons.fandom.com/wiki/At_Long_Last_Leave?oldid=790750"
Community content is available under CC-BY-SA unless otherwise noted.