Simpsons Wiki
Register
Don't have an account?
Sign In
Advertisement
in: Pages with reference errors, Incomplete, Businesses,
and 9 more
English

The Aztec Theater is one of the major movie theaters in Springfield. It is a one-screen cinema located off the town square, adjacent to the County Court House.

It has premiered many installments of the Space Mutants film series, and also screened the landmark animated film Itchy & Scratchy: The Movie. Homer and Mel Gibson also premiered their film, Mr. Smith goes to Washington at the theater.[1]

The Aztec has a no internet spies policy, (at least during the test-screening of Mr. Smith Goes to Washington). It also has a policy to not issue disgruntled viewers refunds. The manager is a black-haired, pimple-faced teenager. 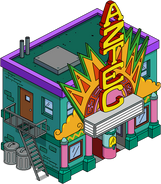 The theater in Tapped Out

Siskel & Ebert: The Movie at the Aztec Theater