"I'm Spelling as Fast as I Can"

“He's got a heart as big as my booooooooobs!”
―Booberella, referring to Charles Montgomery Burns

“I guess we'll have to agree to agree on this one.”
―Kent Brockman

Barbara Jane Lelavinsky more commonly known by her stage name Booberella is an ample-chested vampire-looking woman and a local TV personality in Springfield.

Booberella hosts late-night monster movies and always dresses in low-cut vampire-style outfits that show lots of cleavage. She is well aware of her large breasts, and constantly draws attention to them, makes reference to them, or tells people to look at them.

Booberella's trademark, unsurprisingly, is her breast obsession (with her own breasts), in combination with talking like a vampire. For example, when commercial breaks occur in movies that she hosts, she says things like, "We'll be right back! Then you can see more of my Booooooooobs!" in a manner reminiscent of Count Dracula saying, "I want to suck your bloooood!"

It is unknown if her Romanian accent is fake or not.

She also once appeared in an interview with Kent Brockman where they were discussing Mr. Burns' recent purchase of Channel 6. When Kent made a statement and was obviously waiting for a reply, there was a long pause, during which Booberella said nothing. Finally, she looked directly into the camera and said, "Boooobs!"[1]

Booberella is the daughter of Bill, an employee in the Accounting department at the Springfield Nuclear Power Plant[1]. She has occasionally been seen dating Duffman[2].

When Marge Simpson was taken hostage during a bank robbery, she managed to place a cell phone call to Homer and told him that if she didn't make it out alive, he could get remarried to anyone whose name was on the list in the back of his closet. Booberella was one of the names on the list[3].

Booberella also has her own line of handbags.[4]

Booberella is a parody of Elvira, who is in turn a spoof of Vampira. She also bears a slight resemblance to Morticia Addams from The Addams Family.

Booberella's name is likely a play on words of Vampirella and Barbarella, or boobs and Vampirella. 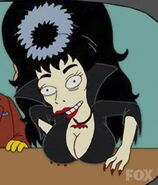