Bart's Bike is a green bicycle owned by Bart Simpson. It appeared in "Bart Gets an "F"" when Bart took Martin down to the bike track to teach him how to be cool. In "Burns' Heir", Homer drives over Bart's bike.

Although Bart's green bicycle was destroyed, it appears again when Bart rides the bike to school at the early hours as a punishment to help Principal Skinner while he goes shy watching.[1] Bart also rides his green bike to the forest while Milhouse took Lisa's bike (without her permission).[2]

Bart is once seen riding a purple bike to Fort Springfield.[3]

Bart later has a gray bike, but after realizing it is horrible, he wants the new one. Homer says that he would get another bike only if the old bike is broken. Bart makes his bike ride in front of Dr. Hibbert's car that smashed it. Homer buys him a new bike, but he has to built it. He does, but when Bart starts riding the bike, it falls apart.[4]

Next to that, Bart also has a red bike which appears in many other episodes.

Bart with his green bike 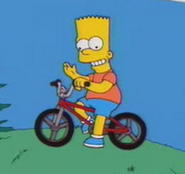 Bart with his red bike

Community content is available under CC-BY-SA unless otherwise noted.