“Do the Bartman!”
―Bartman's unlock message from The Simpsons: Tapped Out.

Bartman (or "The Bartman") is Bart's alter-ego. His alias is Bart Simpson. His powers are grappling a hook, climbing walls, and gliding.

When Bart and Lisa attended a comic book convention, they didn't know they could get a discount for dressing as a superhero. Bart quickly ran into a phone booth and put on a mask and cape calling himself "Bartman", although he still had to pay full-price. He also told a story of Bartman when trying to convince everyone that revenge is great, but in the story Bartman had a full suit and equipment[1].

After leaving the Gotham City Opera House, Bart's parents are killed by someone with a snake tattoo in a dark alley. Bart's Father pleads to be avenged. Bart does as his father says and swears revenge on the man, giving birth to his superhero form, Bartman, with the help of his Grandfather, as he was once a "superhero". He flies around Gotham City, defeating villains on his way for justice. When Serpent (Snake) attempts to steal the "Stealable Jewels of the Orient" from the Gotham Natural History Museum, Bartman arrives, saves the Jewels, and kills Serpent by impaling him on the fangs of a snake statue. In the end, a reporter (resembling Lisa), reminds Bartman that the Serpent's death will not revive his parents. Bartman agrees, but adds that he now feels better, plus, he's got zillions of dollars and no parents to tell him what to do[2].

In the Bartman comics, Bartman fights bullies and super villains who pop up in Springfield. This series ran for 6 issues in the 1990s, but Bartman still frequently appears in the Simpsons Comic Universe.

In Bartman Meets Radioactive Man, while reading comic books in his treehouse, Bart is surprised when Fallout Boy appears and tells him Radioactive Man has been captured by villains. Bart becomes Bartman and travels inside his comic book to save his hero. Items can give him powers like laser vision and ice breath.

In The Simpsons Game, Bart can transform into Bartman. After Bart is Bartman, he can fire his slingshot and glide with his cape. Later on, he can also fire grappling hooks at certain targets. Bartman is an obvious reference to Batman, in name, powers, and appearance. Bart can find a power-up item that for a short time turns him into Bartman with the power to fly[3].

In The Simpsons: Hit and Run, Bart can purchase the Bartman costume in Level 6. He can purchase it from Android's Dungeon & Baseball Card Shop or Springfield Observatory.

In The Simpsons: Tapped Out, Bartman is a costume for Bart.

Bartman and Bartdog in action. 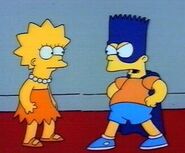 The first appearance of Bartman. 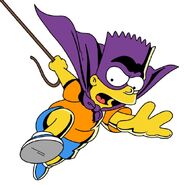 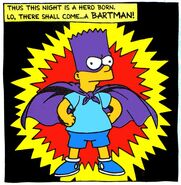 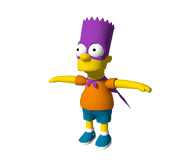 Bartman Transformation in The Simpsons Game