Mrs. Hibbert remains one of The Simpsons’ less notable, saner characters. Bernice has at least three children with Dr. Hibbert, two boys and a girl, and also laughs just like her husband. Their marriage may be in trouble, which is referenced in "Dude, Where's My Ranch?." They also dislike displays of public affection, but on the whole they are one of the longest married couples in the show. In a Treehouse of Horror episode, while besieged by zombies in his office, Dr. Hibbert requests that the Simpsons tell Bernice that he loves her if they see her, but Homer misunderstands and resolves just to give her a high-five. 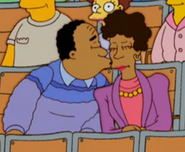 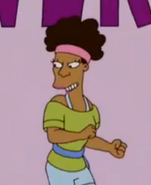 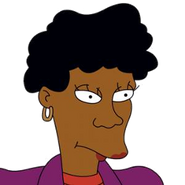 Retrieved from "https://simpsons.fandom.com/wiki/Bernice_Hibbert?oldid=652996"
Community content is available under CC-BY-SA unless otherwise noted.