Blinky the Three-Eyed Fish (or simply Blinky) is a three-eyed orange fish species, found in the ponds and lakes outside the nuclear power plant. The Springfield Nuclear Power Plant caused the mutations.

The Blinky species is seen quite often in natural bodies of water in Springfield, and is a product of the nuclear waste of Springfield Nuclear Power Plant. Blinky is caught by Bart at the Old Fishin' Hole[1] and a picture of it is snapped by Dave Shutton and put in The Springfield Shopper. At the same time Mr. Burns was running for governor, and Blinky became a major topic in his election. He defended Blinky saying he was the next step in the evolutionary ladder and not a horrible mutant. As a publicity stunt Mr. Burns has dinner at The Simpsons home, and Marge unexpectedly serves the Blinky that Bart had caught earlier. He ends up spitting it out because he was uncomfortable with it and losing the election to Mary Bailey all because of Blinky. Multiple three eyed fish were blinded by drinking the water in their river after Homer and several rednecks (including Cletus Spuckler) dumped Moonshine into the river to avoid being arrested by the police.[2]

Blinky has met his unfortunate demise by the waste of Michael de Graff Express.[3]

Bart vs. the World: Blinky appears as an enemy in the Glacier level. He follows the ice flow Bart is riding on, and after a few seconds jumps out of the water to try and hit him. He also appears as one of the characters on the cards in the Concentration mini-game. Blinky is pink rather than orange-yellow, possibly due to graphical limitations.

The Simpsons Hit & Run: Blinky appears in Level 3, Mission 8. Lisa is tasked to collect several 3-Eyed Fish for the Sea Captain (although she decides to secretly free them all instead).

The Simpsons: Tapped Out: Blinky appears in the water when you place lakes.

LEGO Dimensions: While Blinky does not physically appear, Aquaman will mention encountering a three-eyed fish if he and Homer are together. 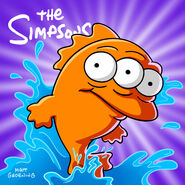 The mutated Blinky in The Simpsons: Tapped Out.