View source
watch 01:36
We're Getting Mutants in the MCU - The Loop
Do you like this video?
Play Sound
The title of this article is conjectural. Though the topic is found within The Simpsons universe, a proper name is not available.

He was first introduced as one of Mr. Burns' many lawyers. Subsequently, he most commonly appears as the lawyer arguing against the Simpsons whenever they wind up in court. He often makes good points against them and wins over the judge. However, he has attempted to aid the Simpson family at least once.[6] He also often appears to serve as a prosecutor.

He worked for "Luvum & Burnham: Family Law" in one episode, where he had a secretary named Uwa (homophone for "YOU WHA?!?!").

His name is never stated, though it's presumably either Luvum or Burnham, given his law firm's name. In one episode, he reveals himself to be the author of a Sci-Fi novel called "The 60 Foot Baby" and on the cover he is simply credited as "Burns' Lawyer."

Despite being his lawyer, he is, sometimes, intimidated by Burns. An example of this is when Burns begins losing money, he (and Burns' other lawyers) loses his competence and acts as a yes-man out of fear of his wrath, going as far as to encourage Burns into making bad investments that bankrupt him.[7]

He is a member of the Springfield Republican Party.

He graduated from Springfield University.

Several of him work as The Creator's lawyers/bodyguards.

In the second segment of the "Treehouse of Horror XVI", he questions what gives Mr. Burns the legal right to hunt people. He writes something that "should work in just about every courtroom" (and is then shot by Burns).

In the second segment of "Treehouse of Horror XIX", after Homer kills Krusty the Clown is approached by the lawyer and several businessman.

He sues the Pawtucket Patriot brewery for copyright infringement.

Writers Al Jean and Mike Reiss have both stated on the DVD commentaries that the voice is based on McCarthy-era lawyer Roy Cohn, and animator Jim Reardon has said that he is designed to look like character actor Charles Lane.

If you compare him to Milhouse, he has a striking resemblance to yet another adult version of him: plus, thin glasses and tuxedo and minus the humor, voice, and relationship with a Simpson.

His voice sounds similar to Louie and Arnie Pye's voices.

In "I, Carumbus", he was shown without his glasses.

He is one of the few recurring characters in the series we do not yet know the name.

The Lawyer in "Treehouse of Horror XIX"

The Lawyer's character in Earthland Realms

The Lawer's appearance in Treehouse of Horror XXVII

The Lawyer at town hall

The Lawyer in the comics

The lawyer in an Angry Mob

The Lawyer's head is trimmed from this shot

The Lawyer reveals his hands

The Lawyer questioning if Lisa's version of Snow White is original

The Lawyer with Duffman

The Lawyer's severed head on a post (in "The Serfsons")

The Lawyer at church 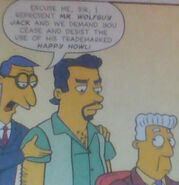 The lawyer in "I, Carumbus"