“Moan, moan, moan! It is not good!”
―English version of Bumblebee Man's Catchphrase

Yaritza Burgos[citation needed], or Bumblebee Man, is the star of a Spanish-language television sitcom on "Channel Ocho", in which he dresses in a bumblebee costume and performs slapstick comedy.

Bumblebee Man never takes off his costume in public, and almost never in private. The sole exception is a short segment showing his private life. In addition to being seen costumeless, Bumblebee Man is shown as being genuinely clumsy rather than simply acting as such. In the end, his house is destroyed and his wife leaves him [1].

His bowling shirt has the name Pedro on it [2], which could be his first name.

Bumblebee man speaks Spanish, primarily, but is once shown speaking with an articulate British accent when he replaced Kent Brockman for a brief moment.[3] He also has translated, in English, a Spanish phrase Krusty said in a campaign speech that inadvertently offended the Hispanic community.

Generally, Bumblebee Man speaks in simple, over-enunciated (and often inaccurate) Spanish sentences. His catchphrases of choice are typically “¡Ay, ay, ay, no me gusta!” (“I don’t like it!”), “¡Ay, ay, ay, no es bueno!” (“That’s not good!”) and “¡Ay, Dios no me ama!” (“God doesn’t love me!”). Quite commonly, his phrases will be intentionally sloppy Spanish: For example, saying "wudpequero" for "woodpecker," when it's actually "pájaro carpintero" [4].

Marge was once up late watching Bumblebee Man on TV and saw him confessing that he didn't know any Spanish until he joined Mexican television and that he was actually Belgian[5]. In The Simpsons: Tapped Out iPad game, meanwhile, he confesses to Lisa that he is actually Norwegian.[6]

In Flaming Moe, Bumblebee Man is indicated to be a member of the Furry fandom (a fanbase for anthropomorphic animals), and is shown holding a sign saying "Furries Fur Moe".

When all of the bees enter Mr. Burns' Casino, he says to the bees "But I am one of you!" and the bees reply"And we hate you most of all Uncle Tom."  This could mean he once went by the name Tom, but not actually. This is because "uncle Tom" is a reference to African Americans using "uncle Tom" as a derogatory slang name, for black people who willingly assimilated into "white" society.

He got kissed by a horse in the Simpsons Movie.

Bumblebee Man appears as one of the contestants in the Duff Ultimate Eating Challenge[7].

Bumblebee is a caricature of El Chapulín Colorado ("The Red Grasshopper"), a character created and portrayed by Mexican television comedian Roberto Gómez Bolaños (best known by his pseudonym "Chespirito"), and his show consists of simple skits, often involving heavy slapstick. "Channel Ocho" is a reference to El Chavo del Ocho, by the same creators. In several DVD commentaries, the show's producers say that whenever they watched Telemundo, this character was always "on," and then they created Bumblebee Man, who is also always "on."

In the Spanish-language version of the show, the humor of Bumblebee Man (known in this version as hombre abejorro in the Spanish-speaking countries of Latin America, or el hombre abeja in Spain) relies on the fact that he wears a gigantic bee costume and frequently engages in physical comedy; there has been no effort made to translate his speech to another language. However, in the Latin American version, he speaks with an over-the-top Mexican accent and in the version that airs in Spain, he does so with a Mexican accent. The Japanese version leaves Hank Azaria's performance untouched. 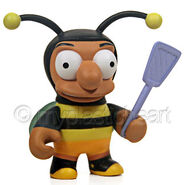 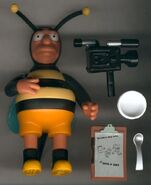 Talking to the producer 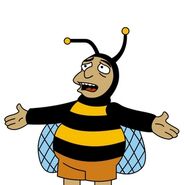 With his wife and chihuahua

Cheering
Add a photo to this gallery
Retrieved from "https://simpsons.fandom.com/wiki/Bumblebee_Man?oldid=432133"
Community content is available under CC-BY-SA unless otherwise noted.