“You can't teach music. You embrace music. Oh, you inhale music. You roll around in a pile of music until...the scent of music is on you, forever.”
―Calliope Juniper[src]

“Oh, Bart rides that board with a passion of an Arapaho ghost dancer.”
―Calliope Juniper[src]

“Look, I don't know how long this will last. It could be a day. It could be the rest of our lives. But you'll never know unless you take this chance. Give yourself permission.”
―Calliope Juniper[src]

Calliope Juniper is the substitute music teacher for the music class at Springfield Elementary School after Mr. Largo quits.

Upon meeting her, Principal Skinner developed a crush on Calliope, so he made Bart Simpson date Melody Juniper (Calliope's daughter), so he can be close to her. She danced with Skinner at an arcade store, next to the "Nacho-Cano". She offered Skinner to go out of the city with her, saying it could last for one day or for forever. Skinner accepted and dated her three months. They soon broke up and Skinner returned to Springfield. He initially thought it was only a day when they broke up but was happy he maintained it as long as he could.

Calliope has dark orange hair that has a single purple streak on the right side and a pink streak on the left side and pink lipstick. She wears a a light green tank-top, a dark brown skirt, brown boots, silver hoop earrings and a necklace with a moon on it. 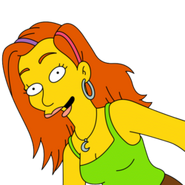