"Life on the Fast Lane"

Charlie is the Dangerous Emissions Supervisor of Sector 7G at the Springfield Nuclear Power Plant. He is one of Homer's friends. He drives a Duesenberg J.[1]

Charlie is known to have recurring bad luck. He was arrested for threatening officials over the slow progression of HDTVs to beat them up.[2] He was once disabled as claimed by Lenny after Homer notices he is not at the plant’s exercise.[3] However, he later recovered in his next appearance. Charlie, along with other employees, were caught on fire because of Homer's negligence, and stupidity.[4] As a member of the Springfield Nuclear Power Plant softball team, Charlie uses his sister's wooden leg as a baseball bat.[5]

Charlie was replaced by Mindy Simmons after he, Homer, Lenny, and Carl play a prank on a worker and cause a radioactive gas leak and Charlie complains to Mr. Burns that the plant requires a real emergency exit rather than one which is painted on. Burns lowers a giant tube which sucks Charlie up, sending him to an Asian country where he is forced to dance on a table.[6]

When Homer sees Charlie exiting the plant and asks if he wants a lift, Charlie declines. Stating that he got tipsy the night before and that he lost something of his, therefore waiting for and expecting a callback.[7]

During a town meeting discussing Springfield's two different area codes Charlie can be seen sitting on the wealthy side as the other side leaves to form their own town. [8]

After some new, German owners take over the plant, Charlie is later seen arriving to work in a new car.[9]

Charlie appears in a flashback where he attends a party and the Rollers Rink Couples Night. He appears to be with another woman who doesn't appear to be like his current wife. Although the woman might most likely be an ex-girlfriend of Charlie or his current wife had a completely different appearance. [11]

Characters in The Simpsons

Charlie bears a resemblance to Sam, one of the barflies at Moe's Tavern. This could be because they both have big glasses, they both have trouble with alcoholism, they have scruffy looks, worried eyes, and have bags under their eyes. They also occasionally are seen hanging out at Moe's Tavern as well.

Characters in other media

In Matt Groening's second show, Futurama the character Terry appears to resemble Charlie including his primary role of being a background filler and his usual role of having bad luck.

He is voiced by Dan Castellaneta, who said that he was "just [doing] an imitation of Lenny", according to the commentary for "Homer at the Bat". His voice sounds similar to the Blue-haired Lawyer, Arnie Pye and Louie, who are also voiced by Castellaneta.

Episodes where he has an actual role are in bold. 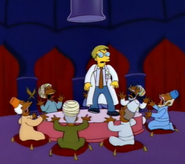 Dancing on a table

With his wife and kids

In his snow gear 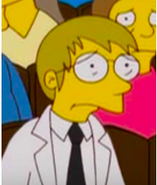 Sitting on a robot part 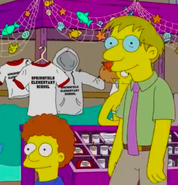 With his possible son or nephew 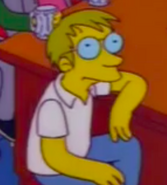