“When that Simpson boy showed up, it took years off my life!”
―Clancy Bouvier in The Way We Was

Clarence "Clancy" Bouvier[2][3], occasionally referred to as Grandpa Bouvier or Mr. Bouvier,[4] was the husband of Jacqueline Bouvier, the father of Patty, Selma, and Marge Bouvier, the brother-in-law of the late Gladys Gurney, the son-in-law of Ferdinand Gurney and Alvarine Gurney, the father-in-law (possibly only posthumously) of Homer Simpson and the maternal grandfather of Ling Bouvier, Maggie, Lisa, and Bart. He was of French origin.[5][6]

Like Patty and Selma, he was a chain-smoker. When he was first trying to catch his future wife's eye, he sent a box of candy with his photo in it to her. After that, she never forgot him. Marge suggested try the same thing when Homer was upset because Mr. Burns did not remember his name.[7] Before his death, Clancy was the only recurring member of the Bouvier family not to outwardly display hatred of his son-in-law, Homer.

Ever since his children were little, Clancy went to Springfield Town Hall to sing the City Anthem, and continued to do so as he aged. He lost his right leg at some point when Marge, Patty and Selma were children.[8]

He was one of the earliest male flight attendants, although he was ashamed of it. This was discovered when Marge boarded his plane to see her "pilot" father, but when she saw him performing stewardess duties, he begged her not to look at him. This, along with several other plane-related mishaps, may have resulted in Marge's fear of flying.[9] At some point, he also served in the United States Navy where he picked up a swearing problem, which nearly cost him his job as a baby photographer.[10]

In the season 3 episode "Bart the Lover", Ned Flanders and Marge think Homer swears too much. Marge tells Homer the above story of her father almost losing his job due to his swearing problem. To solve this problem, Jacqueline put a swear jar in the kitchen. then every time he said a bad word he put in a quarter. It worked for Homer, and apparently it worked for Clancy, too.

Clancy first met Homer when he arrived at the Bouvier home claiming to be Marge's prom date. He was kind and complimentary to Homer, saying, "From what she's told me, I'm sure you're a solid citizen." Sadly for Homer, that was actually Marge's description of Artie.[11]

When Marge returned home after the prom, she overheard her father stating that "when that Simpson boy showed up, it took years off [his] life", to which her mother replied, "Will you stop? She went with the good one." (referring to Artie).

Though Clancy is strongly implied to have died before the start of the series—he isn't present with the rest of the Bouvier family in "Bart vs. Thanksgiving", and Jacqueline is portrayed as being unmarried in "Lady Bouvier's Lover"—it was never outright stated that he is dead until season 18's "Jazzy and the Pussycats".[12] It was later revealed by his widow Jacqueline that he died of lung cancer.[13]

Exactly when Clancy died is vague. He was not present in "I Married Marge" when Homer and Marge marry and Bart is born, implying he died prior to that. However, a flashback in "Walking Big & Tall" shows a man seated next to the Bouvier family, presumably Clancy, when Bart and Lisa were toddlers. In "Bart's Not Dead", Bart is unaware that his grandfather was missing a leg, implying he has no conscious memory of him.

Clancy's first name originally appeared in various Simpsons books and didn't become canon until season 20's "Wedding for Disaster", when it can be seen on Homer and Marge's wedding certificate.

In an issue of the comic Simpsons Illustrated, Lisa says that Clancy died in rollercoaster accident in 1985.

In Treehouse of Horror III, he was eaten by King Homer at his and Marge's wedding despite this Marge was not upset.

In The Simpsons: Tapped Out, Clancy's ghost comes to warn Homer during the episode tie-in quest line "Ghouls and Gluttons".

As Clancy is deceased, and only a minor character, he is rarely seen or referred to. Episodes in bold are incidences when Clancy had a major role or featured heavily in the episode's storyline. 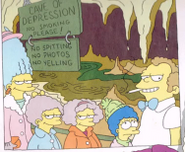 Clancy, Patty and Selma in "The Way We Was"

Clancy with Marge, Patty, Selma and Jacqueline in "Puffless" 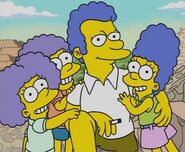 As a ghost in "Treehouse of Horror XXVI" 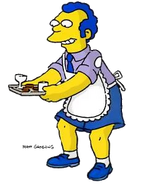