Commissioner Clarence "Clancy" Wiggum is the head of police of the Springfield Police Department. He is an extreme stereotype of a lazy police officer (copper). Comissionner Wiggum is morbidly obese, straightforwardly indecent, ignorant, incompetent, and really lazy, with a fondness for doughnuts and "Chintzy Pop" (a fictional popcorn that is based on Jiffy Pop). While he pretentiously feigns authority, he has little regard for individual rights or even public safety. He is disturbingly uninformed and flaunts his power, albeit with good intentions most of the time. He is part Irish.[2] His pants are size 56.

He, along with the rest of Springfield's government and Springfield police force, is also corrupt, having asked for or taken bribes several times. An example of this is he can skip any crime if he is bribed, like being notably solicited Troy McClure and Homer Simpson for bribes in exchange for "looking the other way" to their criminal activities. When Bart bribed him with stolen wedding presents, he told him to read his badge and, at the bottom of the badge, was the caption "Cash Bribes only".[3] He has a strained friendship with Mayor Quimby, as the two men vie to have control over the city, which once lead to a serious argument in regards of who takes over during an emergency on the Monorail crisis. Wiggum claims to have compromising photographs of the mayor. Mayor Quimby argued back saying, "you don't scare me; that could be anyone's ass"! This strained relationship may help to explain why Commissioner Wiggum has retained his job, despite his inability to do any of his duties.

He is often assisted by his more intelligent (but still quite lazy and often rather cocky) "top cops" Eddie and Lou. He is completely ignorant of Springfield's laws, makes up his own laws on the fly and often quotes sayings from the police handbook which cannot actually be found in the book ("like the book says, if you can't beat them, join them"). According to The Bart Book, Clancy is also in the SPD Bomb Squad, which is in fact just him in a hockey mask.

Clancy Wiggum was possibly born in Ireland.[4] However, he also seemed to spend at least some part of his early childhood in Maryland, as he mentioned he used to sell ribbons there with his father, Iggy Wiggum. Iggy was a WWII veteran who died in a parade float accident in 1979, along with Arnie Gumble, Sheldon Skinner, Etch Westgrin, and Griff McDonald, all members of Abe Simpson's Flying Hellfish.[5] He did, however, grow up in Springfield and was among the same class and age group as Homer Simpson, Lenny Leonard, Carl Carlson, Barney Gumble, and possibly Marge Simpson.

At an early age, Wiggum played cops and robbers with Homer and other kids his age, showing a clear ambition to become a police officer. At the age of 16, he was a hall monitor at high school, and possibly had a part-time security guard job at Springfield State University. Wiggum was present at the University's germ research labs (Prof. C. Montgomery Burns was chairman at the time) when Mona Simpson and the hippie activist group she was part of sabotaged the germ experiments. Wiggum, who had suffered from asthma prior to that, was cured by antibiotics that the group released to kill the germs, and helped Mona Simpson escape the police when she was on the run twenty-five years later to return the favor. Near the beginning of the school year in 1978, Commissioner Wiggum, then a drug officer, was investigating Lenny, Carl, and Homer for taking marijuana, and had his sniffer dog, Sergeant Scraps, sniff Homer to see if he had weed: Sergeant Scraps succeeded in sniffing drugs on Homer, and, to even Wiggum's shock, attacked Homer by biting him in the crotch (as he placed his joint in that area) and started throwing him around like a throw-rug.

In 1985, Commissioner Wiggum was involved in the barbershop quartet called the "Be Sharps". Wiggum was a member with Homer Simpson, Seymour Skinner, and Apu. However, a talent scout, who showed interest in the Be Sharps, didn't like Wiggum as a performer. Consequently, he was thrown out of the group. When auditions were held to find a replacement for Wiggum, he attempted to be reselected for the quartet. He wore a disguise under the name Dr. Doolittle, but was found out.[6]

Early attempts to get into the Police Force when he was a teenager were unsuccessful on account of his asthma, so when it had been cured he could then pursue his ambition to become a professional police officer. Having entered the Police Academy by age 24, Wiggum managed to work around his many shortcomings and finally become a full fledged officer. By the age of 34, he had managed to work his way up to the position of Police Chief of Springfield. He eventually was promoted to Commissioner after Bart's hoax kidnapping case. It is implied that Wiggum managed to overcome his shortcomings with coaxing methods such as great skills with back massages and charm to get the position of Chief. But he actually received the job when the frustrated former Chief resolved to give it to the next person he met, which was Wiggum. Another explanation is when mayor Quimby said that he made Wiggum the police chief so that the law would not be enforced to the letter, and he could get away with all his corrupt activities. This may also explain why Commissioner Wiggum has somewhat of a feud with Mayor Quimby, such as getting into a serious argument about Mayor Quimby in regards to Marge's arrest,[7] blackmailing Mayor Quimby with incriminating photos,[8] and even trying to arrest Mayor Quimby for corruption charges.[9] Regardless, Wiggum had accomplished his childhood ambition.

Other than his job as Police Commissioner, he is also the coach for the Mighty Pigs Hockey team. He is also implied to have a gambling problem, with a tendency to bet on the other team even when his team won.[10]

Beside his late father, Clancy is the husband of Sarah Wiggum, whom he met when he was arresting her for possession of drugs that he planted on her to "make her notice him", and is the father of second grader at Springfield Elementary, Ralph Wiggum. He has a cousin named Mark, who went to Pennsylvania State University, he was a "fat kid... played a lot of Tetris". He has a deceased brother-in-law named Fred Kanickee (to which he arrested the man responsible for killing him, Dr. Ecoyan, as soon as the voters overturned the assisted suicide law), an uncle who (according to Wiggum) died of "crotch dot", and an unnamed brother who, after attending military school, presumably went crazy and now "owns and operates a famous cave." He also says he has a sister which is completely bald like Sphynx cats.

It is shown in Professor Frink's future machine that Wiggum will, along with Lou and Eddie, become a Robo-Cop like machine-officer with a rotisserie in his stomach.

Wiggum appears several times in The Simpsons Hit and Run video game. The first time was during Level 2, where he attempts to arrest Bart for buying illegal fireworks (he used his son Ralph Wiggum as bait to arrest people buying illegal fireworks as part of a sting operation), intending to place him under five life sentences of community service, but he fails to catch his quarry, although he later seems to forget this as he tells Bart that Herman's Military Antiques was robbed of a radio recently, and suggests, although not completely sure, that the skid marks from tires would probably lead to the culprit. He later appears in Level 3 when he is trying to bust Snake Jailbird under the Three Strikes Law, but hasn't gotten any evidence yet due to his being a "very, very bad cop." in his own words. Lisa manages to help him collect evidence to put Snake away in exchange for information in regards to her brother's whereabouts. However, he makes a bigger role in The Simpsons: Hit and Run - Level 4, where he first asks Marge to collect some donuts which are falling out of a Lard Lad Donuts truck due to suffering a severe case of sugar withdrawal in exchange for giving her information about cropcircles, and secondly when he races Marge to 742 Evergreen Terrace after she destroyed several trucks of Buzz Cola (he was deeply upset at Marge for doing so due to Buzz Cola being the only thing that allowed him to "gain the courage to take his shirt off in the station locker room").

Wiggum appears at the end of Bartman Begins to take Principal Skinner away for having the three teenagers rob the museum. He also appears as one of the contestants in the Duff Ultimate Eating Challenge in Around the World in 80 Bites. He appears as one of the enemies in Mob Rules, where he tries controlling the mob, mainly by blockading key parts of the town but, in the Xbox and PS3 versions, helping try and protect the statue in the town square. He can also be heard speaking through his megaphone throughout the level.

He can also be found in the police station during free roam.

Chief Wiggum has his own spin-off show in "The Simpsons Spin-Off Showcase", "Wiggum P.I." He  is fired from the Springfield force for corruption and moves to New Orleans to start working as a private investigator, with Skinner as his partner. Wiggum and Ralph live in a boat house, and Ralph is kidnapped by a villain called Big Daddy. He later finds his son, and Big Daddy escapes.

Wiggum is voiced by Hank Azaria on a gruff tone similar to Moe's, however a bit higher and faster. Azaria first based his voice for Wiggum on David Brinkley (first season) but soon switched it to an Edward G. Robinson impression.

His surname "Wiggum" is Matt Groening's mother's maiden name. As "a conscious pun" Wiggum was designed to look like a pig. In the episode "Marge Gamer", his Earthland Realms alter-ego looked much like his real-life self, only with a pig nose, tail, etc. Many Springfieldianites, like Sideshow Bob, have made fun of his pig-like appearance with taunts such as "Chief Piggum".

Ralph was not revealed to be the son of Clancy Wiggum until the episode "I Love Lisa", where Ralph asks for advice from his dad about his crush on Lisa. The writers decided that making Ralph Chief Wiggum's son made sense due to similar body types and levels of intelligence.

Chief Wiggum with his family

In "Weekend at Burnsie's", which aired in 2002, Wiggum's appears as a young adult in a flashback to 1978 (He would be approximately 25 years old, going by the timeline established in "Mother Simpson". Plus, he appears to be much slimmer than his earlier self, which is usually reversed in the process of maturity.

In "The Way We Weren't", which aired in 2004, Wiggum appears in a flashback set when Homer was 10 (~1978 according to that timeline). Wiggum now appears to be almost Homer's age, although even in the present there is at least 6–7 years of difference between them.

Wiggum (24) as a cadet in Police Academy, as shown in "Springfield Up" 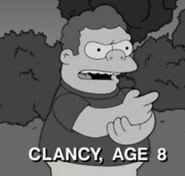 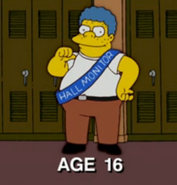 Teenage Wiggum as a hall monitor, as shown in "Springfield Up"

Retrieved from "https://simpsons.fandom.com/wiki/Clancy_Wiggum?oldid=585934"
Community content is available under CC-BY-SA unless otherwise noted.