“You know why they got us sitting next to each other."
"Uh, 'cause we're the two funniest guys in our towns?"
"Damn right.

Cleveland Orenthal Brown Sr. is a supporting character on Family Guy and the main protagonist of its spinoff The Cleveland Show. In the end of "Homerland", he appears in the Simpsons' living room with his wife Donna, his son Cleveland Jr and his stepchildren Rallo and Roberta. He and his family are thrown out of the Season 25 premiere (including Homer) but they were eventually let back in.

In the episode "Homerland", Cleveland and the rest of The Brown family appear in the ending credits gag, going to a party to celebrate the 25th season of The Simpsons, along with families from tons of other FOX cartoons such as Family Guy, American Dad!, and Bob's Burgers. However, they are not allowed to go into the party because they're black. The family starts picketing outside the party, demanding to be let in. Homer Simpson, who was also disallowed in there, is joining them, saying that FOX is also against him. The Brown family is eventually let in, but Homer Simpson is still locked out.

In the episode "The Simpsons Guy", he is seen, sitting at the Drunken Clam, with Peter, Quagmire, and Joe, while they're having a conversation about Peter's comics. He does not have any dialogue for that entire scene. Later, Peter makes a cutaway gag to himself and Homer, fighting in the air force. Apparently, Bob from Bob's Burgers has to join along because without Family Guy and The Simpsons, holding him up, he can't "fly" on his own. He then gestures over to Cleveland, giving an example of what happens when they let a show fly solo. We then see Cleveland in an airplane, falling to his doom. Even later, he is shown sitting beside Carl Carlson at the trial. The only reason why they were put next to each other is because they were black, but they assume it's because they're both the funniest guys in their towns.

Cleveland Brown is a big, fat man. He has dark, curly black hair and a mustache, that he takes great pride in. He has a yellow shirt and blue pants, as well as dark brown shoes.

Cleveland Brown is a very calm, peaceful, and tolerant guy who is always very happy and accepting of everything. On very rare occasions does he ever get angry, and even when he does, it takes a lot to make him feel that way. In the Family Guy episode "The Cleveland-Loretta Quagmire", Cleveland managed to stay happy, even after his best friend had an affair with his wife and his wife divorced him and insulted everything about his character. It wasn't until Peter constantly pressured him, that he finally got a sudden surge of anger. When he did, he was uncontrollably violent and did not hold back any punches or show any mercy, trying to kill Quagmire, while also damaging tons of property in the process. If you're looking for a shortcut to Cleveland's berserk mode, then making racist comments, especially using "The N-Word" is a quick way of triggering him. He is also the voice of reason to the friend circle, always giving out cautionary warnings to Peter, when he's pulling off another one of his stunts. However, since he's so mild and passive, he is always being ignored. This is taken to extremes, showing that Cleveland will allow anyone to do whatever they want to him, even if he completely hates it. This is because he has no way of telling them to stop. Because of this, he lets Loretta control his entire life, he allows Peter and his friends to torture him with stupid endeavors, he never gives his son any orders or punishments, and he basically has no control over his life.

When Cleveland got his own spin-off series, his character quickly developed into something completely different. All of Cleveland's timidity instantly disappeared, and he had officially become a loud and outgoing character, who was always dancing around and turning everyday dialogue into a little musical number. He played with his dialogue and made up a bunch of funny phrases and made up words to say. Now, he was the wild and crazy guy in the group, and his new bar friend, Tim served as the calm and overlooked voice of reason to his hair-brained schemes. He had officially taken on the role of Peter Griffin in his new friend circle. The only difference between Peter and himself at this point, was that Cleveland actually cared about his family enough for him to help them in their times of need and to try and make up for his stupid actions that might have hurt them. He had also taken on some more personality traits. Cleveland was very sporty. He has expressed a great passion in playing baseball, so much so, that he became the coach of The Stoolbend High baseball team. He was also really good at playing basketball and enjoyed playing games of basketball with Rallo in his spare time. He was also a huge fan of watching football, holding Super Bowl parties at his house, and even dressing as the GM Robot. He is very fashionable, especially when it comes to his mustache, and he spends a lot of time grooming and waxing his mustache, to the point where he even has his own mustache make up kit in the bathroom. He also has an entire wall, stocked with all different kinds of hats, which he wears to make himself look more snazzy. Every time a special event happens, he needs to get all dressed up in this brand new outfit, so that he can be noticed by everyone who sees him. He was very musical and likes singing his own made up rap songs. He made up his own rap song, along with Kenny West, which Kenny took all the credit for. This incident happened twice. It's not just rap, though. Cleveland enjoys all kinds of music. He wrote a town anthem for Stoolbend, which was an upbeat country-esque song, he sang a gospel choir song to his son, in an attempt to make him believe in the Christian God, and above all things, he can't stop singing his own theme song, which would fall into the pop category.

After Cleveland's show was cancelled and he returned to Family Guy, he had officially lost all substance to his character, whatsoever and his only personality trait was being black. Everything he did was either a contribution to a modern-day black stereotype or a reinforcement of an archaic form of black stereotyping. 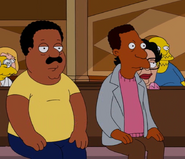