Jeffrey "Jeff" Albertson, better known as Comic Book Guy, is the overweight, geeky proprietor of the comic book store, The Android's Dungeon and Baseball Card Shop. Though thought to be an antagonist, he is sarcastic, surly, and insulting at certain points.

Comic Book Guy is a very obese, socially incompetent, unshaven, cruel man who is perhaps best known for his sarcastic quips. He holds a master's degree in folklore and mythology (he translated The Lord of the Rings into Klingon as part of his thesis).[2] He exhibits geeky behavior to an extraordinary and deliberately unrealistic degree, and often also makes references to obscure subjects or internet culture. His catchphrase is the declaration, "Worst... (episode)... ever". He states that he is a 45 year-old virgin who lives with his mother.[3] His obesity has been stated on The Simpsons: Hit and Run, where he can be used driving you around in his car, when one of his replies is that he might as well pick you up, since he can't fit into his office chair anymore. Comic Book Guy is extremely overweight to the point to were his clothes barely fit. He also at one point suffered from lumbago.

Appropriate to his name, Comic Book Guy is obsessed with comic books, pop culture and science fiction. Comic Book Guy has a bumper sticker that reads "My Other Car Is The Millennium Falcon," given to him by a Harrison Ford lookalike. The license plate on his AMC Gremlin is NCC-1701, the registry number of Star Trek's USS Enterprise. The contents of his display case include, among other oddities, a photo of Sean Connery signed by Roger Moore and a very rare Mary Worth in which she advised a friend to commit suicide. He also owns a T-shirt that says "C:/DOS C:/DOS/RUN RUN/DOS/RUN" (Notice the incorrect usage of the forward slash. DOS directories are listed with a backslash, so it would be "C:\DOS C:\DOS\RUN RUN\DOS\RUN"). He is a member of the Springfield branch of Mensa, along with Principal Skinner, Dr. Hibbert, Lisa Simpson, Professor Frink, and Lindsey Naegle. In the episode "Beware My Cheating Bart", he says he is a cyber bully.

In the episode Large Marge, Comic Book Guy had liposuction performed on him, so he would fit in a Superman costume.

Comic Book Guy lived in his parents basement in the 1980s. He had a dog named Chewbacca (now deceased). He also went to a fat camp, which, judging by his current appearance was unsuccessful.[4]

Comic Book Guy is the owner of The Android's Dungeon and Baseball Card Shop, a local comic book store. Many of the comics and toys he sells are of very poor-quality, and often sell for very high prices. His store is his sanctuary, where he holds some level of self-esteem, imperiously lording over pre-teen kids, like Bart Simpson and Milhouse Van Houten, using a heavily sarcastic tone. When he was the target of mockery while trying to return the Ultimate Belt, he sighed, "I must get back to my comic book store, where I dispense the insults rather than absorb them". His store contains a section full of illegal videos, which include Mr. Rogers drunk, Alien Autopsy, Illegal Alien Autopsy, a top secret American nuclear war strategy session, a "good version" of The Godfather Part III, Kent Brockman picking his nose, and Ned Flanders in a police informant video, wherein he claims that Homer released a radioactive ape in his house (Although, according to Bart, Homer only let the Ape into the house because the Ape tricked Homer, and not out of malicious intent). He later was arrested and had his store shut down temporarily because of this. He once had to give up the Ultimate Belt (which he won as a door prize at a Star Trek Convention) because, as he pointed out, "the average Trekker has no use for a medium-sized belt".

At a small point in the episode Husbands and Knives, due to a better comic book store opening next door, it caused Comic Book Guy to go out of business, getting him to stoop to sell pretentious martial arts merchandise to children, but soon backfired after also having attempted to assassinate his competitor with his weapons. After that, Comic Book Guy was forced to close down his comic book store and became unemployed (which his place later turned into a females orientated gym). It's unclear how Comic Book Guy got his comic book store back as future episodes shows The Android's Dungeon again.[5]

In North Haverbrook, there is a comic book shop named "Mylar Baggins" and the proprietor bears a striking resemblance to Comic Book Guy with the exception that his skin and hair are slightly darker. He also has a deep-rooted rivalry with a store similar to his: "Frodo's of Shelbyville". These shops could have had the same owner, as both rival store names refer to The Lord of the Rings character Frodo Baggins. During the Trappuccino crisis, Comic Book Guy says that his obsessive comic book collecting is a "life well spent".[6]

In Homer the Whopper, Comic Book Guy created the comic book series Everyman. He apparently created 278 issues, including the controversial issue with the death of Marmaduke. However, he was reluctant to self-publish them initially because he feared that he'd be mocked by the internet community for his comics. While trying to exasperate Comic Book Guy by feigning complete ignorance on the history of Spiderman, Bart and Milhouse stumbled upon a draft of an issue of Everyman that he was working on. Comic Book Guy then learned that Bart and Milhouse actually liked the comic, and after a bit of convincing, he decided to self-publish.

The comic's popularity started to soar as a result, with a movie project starting for the Summer Market. Some movie executives requested to make Everyman into a movie. Comic Book Guy is reluctant to allow them to work with the movie, especially as the same movie company apparently ruined the Stratego movie for him. He eventually relents, but only under the condition that he picks the person who will portray Everyman. When they refused that condition, he opened the door to the store, implying that he wanted them to leave, until they agreed to that condition, commenting that being "hard-balled by Hollywood" is the closest thing to a physical sport that he could ever do.

He later explains that he wants a "complete loser" to portray Everyman. He then picks Homer Simpson for the part, after the latter accidentally walked into the store, not realizing it was closed for auditioning. He then spent his time talking to people at his new, Hollywood-style house about what it is like to be a producer, and adopting a Cambodian Orphan named Prius. However, when the movie was going over budget and Homer ended up gaining an eating disorder due to his fitness coach abandoning him for Turtle (to the extent that he couldn't even get out of his trailer without it being sawed off), he tried to end production of the film, but ended up being thrown out by security into a dumpster with disgraced executives.

He later ended up sacrificing any chance at another Everyman movie being made by voicing his honest opinion that the Everyman movie was the worst movie ever. It is unknown if he still worked on his comics after this.

Comic Book Guy was once married—in an online role-playing game. He and his Internet wife contemplated having children, but that would have severely drained his power crystals. He was shown paired with Mindy Simmons, the woman who had briefly tempted Homer, during a mass-marriage that occurred when a cult took over Springfield, and presumably the two were wed in the mass ceremony.[7]

While part of an intellectual junta that briefly ran Springfield, he proposed plans to limit breeding to once every seven years (a reference to the Vulcan blood fever of mating, called Pon Farr), commenting that this would mean much less breeding for most, but for him, "much, much more".

He was a virgin well into his forties when he became romantically involved with Principal Skinner's mother Agnes. Chief Wiggum was notably repulsed when he and his officers stumbled upon the couple "in the act."

He later dated Edna Krabappel[8] and was shown with the Superman logo tattooed on his upper right buttock (which is interesting, as in the Comic Book Guy's Book of Pop Culture, he states that he hates Superman; it's possible that considering the location he doesn't consider this to be a compliment). While at the Springfield Bi-Mon-Sci-Fi-Con, Comic Book Guy meets a woman to whom he is attracted and asks, "How do you feel about forty-five year old virgins who still live with their parents?" However, this relationship does not progress any further when he refuses to comb the Sweet Tarts out of his beard.

In the episode "Married to the Blob", he met Kumiko, a Japanese mangaka, and later married her.

Comic Book Guy appears throughout the entire game to point out various videogame cliches that the player can unlock by performing certain actions. He also appears as one of the contestants in the Duff Ultimate Eating Challenge in the level Around the World in 80 Bites, and in the form of a gang of sumo wrestlers (also cliched) in Big Super Happy Fun Fun Game.

He had a cameo appearance in The Cleveland Show episode Hot Cocoa Bang Bang voiced by Hank Azaria, where he simply states "Worst cameo ever".

Comic Book Guy was partly inspired by a clerk at the Los Angeles Amok book shop who often "[sat] on the high stool, kind of lording over the store with that supercilious attitude and eating behind the counter a big Styrofoam containerful of fried clams with a lot of tartare sauce." Matt Groening noted that: "I can't tell you how many times people have come up to me and said, 'I know who you based that comic book guy on. It's that comic-book guy right down the block.' And I have to tell them, "No, it's every comic-bookstore guy in America." Hank Azaria based Comic Book Guy's voice on a student who went by the name "F", and lived in the room next door at his college. Azaria also "loves that the character is an adult who argues with kids as if they're his peers."

A long-running gag on the show was never to reveal the character's name, with other characters referring to him as "Comic Book Guy". Finally, in the February 6, 2005 episode, "Homer and Ned's Hail Mary Pass," Comic Book Guy nonchalantly told Ned Flanders, "My name is Jeff Albertson, but everyone calls me 'Comic Book Guy'." Showrunner Al Jean remarked, "That was specifically done to make people really mad. We just tried to pick a generic name. It was also the Super Bowl show, so we did it so the most people possible would see it." Groening stated that he had originally intended him to be called Louis Lane and be "obsessed and tormented by" Lois Lane, but was out of the room when the writers named him.

Comic Book Guy has also been seen in quite a few episodes but he has had very few episodes where he is a major character. He is rarely seen outside The Android's Dungeon and most of his interactions are with Bart Simpson. Comic Book Guy wasn't seen very often early in the series of the show and has not been seen very much since in the 19th season.

The Collector Tapped Out

Comic Book Guy. As he appears in The Cleveland Show.

The Simpsons Complete Season 12 boxset with Comic Book Guy on the cover. 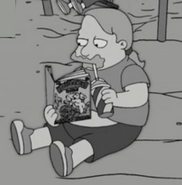 "Oh, loneliness and cheeseburgers are a dangerous mix!" Comic Book Guy in a wheelbarrow after eating too much cheeseburgers to himself.

Retrieved from "https://simpsons.fandom.com/wiki/Comic_Book_Guy?oldid=653514"
Community content is available under CC-BY-SA unless otherwise noted.