He is a member of the Springfield Republican Party. He is not very popular there, as everyone always thinks his ideas are just plain stupid. Apparently he was in charge of ordering pizzas, and apparently gets the orders wrong, which contributed to his unpopularity. He claims that he has problems with the orders due to being confused due to being "half this, half that."

He appears in the opening segment of Treehouse of Horror XX as one of the monsters that weren't cool anymore; he is seen at the Halloween party dressed as Iron Man; he and the other monsters (Frankenstein, Mummy and Werewolf) were later seen being forced out of the party by their wives. Homer was then killed for no reason.

In Treehouse of Horror XXI, he appears as Edmund's father. 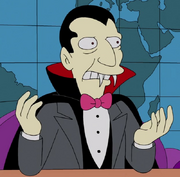 Dracula's most common appearance in the series, as a member of the Republican Party. 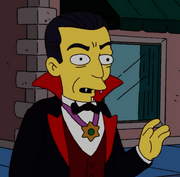 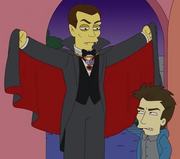 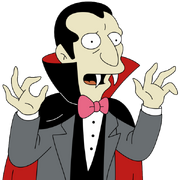 Retrieved from "https://simpsons.fandom.com/wiki/Count_Dracula?oldid=800947"
Community content is available under CC-BY-SA unless otherwise noted.