This is about the D'Amico family. For the crime family run by Fat Tony, please see Springfield mafia.

(Fit) Fat Tony runs the Springfield mob, with help from Louie, Legs, Johnny Tightlips and others.[1] He owns a house "down the shore," on the beach, in which every light is a tanning light.[2][3][4]

Michael D'Amico is Fat Tony's son, an only child. He is a student at Springfield Elementary, where he plays in the band.

He says he's not like his dad. He has a passion for cooking. He has a gift. On one occasion, Fat Tony is hospitalized. Johnny Tightlips advises him to take his dad's place, but he doesn't.[5]

He does invite the Calabresi crime family -- Fat Tony's arch enemies -- to dinner, however. He makes the dinner. One of the ingredients of the meatballs is poison. The Calabreses die.

Anna Maria D'Amico, formerly Anna Maria Hernandez, was Fat Tony's wife -- but she was "whacked by natural causes." Fat Tony used to bring flowers to her grave every Sunday, before he died.

Fat Tony hired Bart Simpson, for a little while, as a bartender for the Legitimate Businessman's Social Club (where the Springfield mafia conducts business and socializes).[7]

Krusty the Clown owed the mob money, but when Fat Tony demanded he pay, Krusty said he didn't have the money. Fat Tony ordered his henchmen to kill Krusty, but he escaped. Tony's mafia took Krusty's clown college. The mob recaptured 'Krusty', not realizing it was Homer, made up to look like Krusty. Don Vittorio DiMaggio -- who Fat Tony deferred to -- said he'd let Homer and Krusty live if they did a trick together, and they did.[8]

Homer asked Fat Tony to help Marge's business, so he and his henchmen attacked Marge's competitors -- but when Homer refused to return the favor, Fat Tony demanded Marge's profits, and then went with Louie and Legs to the Simpson's home to collect it.[9]

Fat Tony got the school milk concession, by bribing Mayor Quimby, but Homer discovered it was rats milk. He made the mayor get the milk out of the schools, so Fat Tony beat the mayor with a baseball bat.[10]

Krusty the Clown once lost his daughter's violin to Fat Tony, in a poker game -- but Krusty sneaked into Fat Tony's compound, during a mob summit, and stole it back.[11]

SpringShield, a private police force Homer started, caught Fat Tony, Louie and Legs gluing cotton balls on ferrets to sell to a pet shop, passing them off as toy poodles. SpringShield busted the mobsters, so they went to the Simpsons house to gun down Homer -- but Maggie, unseen, shot them all.[12]

Fat Tony is very touchy about anybody touching his car, but Bart stole his hood ornament anyway.[13]

Fat Tony directs Louie, Legs and Johnny Tightlips to take out the Castellaneta family. The four of them meet the Castellanetas at Luigi's. They all draw their guns, culminating in a standoff.[14]

Even in jail, Fat Tony calls the shots. When Homer is sent to jail, and becomes a snitch, Fat Tony has Snake tell Homer there's going to be a breakout. Homer snitches, all the guards go outside, waiting for them, leaving Homer alone with the inmates that want to kill him.[15]

Homer borrows money from Fat Tony, who has Legs and Louie torture Homer until he agrees to let their crime syndicate use his home to shoot an adult film.[16]

The Calabresis shot Fat Tony, and his son killed them.[17] 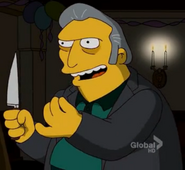 Fat Tony with Legs, Louie and Johnny Tightlips
Add a photo to this gallery

Retrieved from "https://simpsons.fandom.com/wiki/D%27Amico_family?oldid=819771"
Community content is available under CC-BY-SA unless otherwise noted.