"Funeral for a Fiend"

"Brother from Another Series" (promo image)

Tress MacNeille
Dame Judith Terwilliger (née Underdunk) is the wife of Robert Terwilliger Sr. and the mother of Sideshow Bob and Cecil Terwilliger. According to Lisa, she is a retired Shakespearean actress. Her sons get their extremely curly hair from her. Though she looks like an elderly female version of Sideshow Bob, she and Cecil share a similar nose structure.

The title "Dame" means that she has been knighted, likely for services to theater. 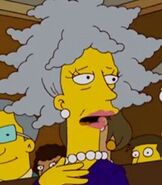 Judith in "Funeral For a Fiend"

Unlock message in The Simpsons: Tapped Out
Add a photo to this gallery

Retrieved from "https://simpsons.fandom.com/wiki/Dame_Judith_Terwilliger?oldid=907853"
Community content is available under CC-BY-SA unless otherwise noted.