He first appeared at a peace agreement at Fat Tony's home when Fat Tony's son Michael explains he wants to be chef.

Amused, Dante Sr., along with Dante Jr., and Big Alberto, attempt to murder Fat Tony but they do not succeed.

Later, at the second peace agreement led by Michael, the Calabresi eat spaghetti that Michael had poisoned, and he and the rest of the Calabresi die. 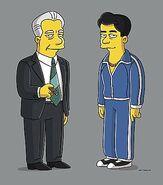 On an FBI chalkboard
Português
Community content is available under CC-BY-SA unless otherwise noted.
Advertisement