“I need strawberries right now.”
―Darcy to Bart Simpson
“Dad, lay off the Bartman.”
―Darcy to her father after "fighting" Bart, possible reference to "Do the Bartman"

Darcy is a girl that Bart Simpson once had a crush on from North Haverbrook.

Bart Simpson, who recently acquired a drivers license (legally) as the reward of accidentally extinguishing a very large fire in town by driving up an uncontrollably fast go-kart filled with foam fuel from the hill nearby, explored the neighborhoods around and met Darcy, a cute teenage girl who was hanging out with her fancy-car-hooking-group of friends. After approaching Darcy, she got in his car, saw his physique and told him that he looked awfully young. Bart made up a story of him "having that disease that makes you look like an old man, but they gave me medicine for it and I took too much" Darcy believes Bart to be 16. They quickly begin a romantic relationship, go on dates, and she soon proposes marriage. At the courthouse, she reveals that she is pregnant. Bart thought he knocked her up, causing him to tell his real age and flee (to no avail). However, Darcy confided to him that he couldn't be the father because pregnancy isn't the result of kissing but an act of intercourse. She then revealed that, all this time together, she thought Bart was just stupid at first, but this confirmed he couldn't be 16. Bart admitted he's actually both stupid and 10. The child is not Bart's; instead, the father is a Norwegian exchange student who already returned home. She wants to get married because her parents would be angry with her unwed pregnancy. In an act of uncharacteristic and oddly mature chivalry, Bart agrees to marry Darcy, and they drove to Utah, where marriage restrictions are known to be a 'little' loose, without parental consent and unconcern of age. He planned to raise his step-child and their children together. Eventually, Homer, Marge and Darcy's parents catch up with them to stop them, knowing that they are too young to get married. Darcy's mother reveals that she is pregnant herself, and the family agrees to pass the two babies off as twins so as not to reveal Darcy's sin. Darcy and Bart end their relationship, while Bart, (in his own way) assures her they will meet again, to which she agrees.

She reappears in a cameo in Moonshine River, where Bart visits her at her house to ask for another chance at romance, but for some unspecified reason, she slams the door on him after saying, "Drop dead." It is also shown that Jimbo Jones is helping her in taking care of her baby and is also presumably her new boyfriend, as he had broken up with Shauna last season. It's possible that Darcy may have moved to Springfield. 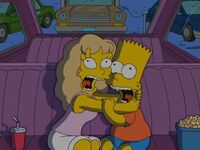 Bart and Darcy scared at the movie they watched. 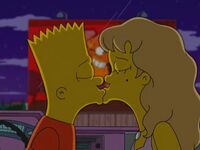 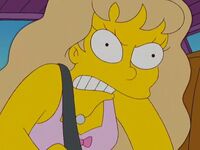 Darcy yells at Bart that she wants/needs strawberries.

Darcy hanging out with Bart.
Add a photo to this gallery
Retrieved from "https://simpsons.fandom.com/wiki/Darcy?oldid=821580"
Community content is available under CC-BY-SA unless otherwise noted.