Kyle[2], also known as Database, is a student of Springfield Elementary and the leader of The Superfriends.

He is the head of The Superfriends, a group of nerds consisting of Cosine, Ham, E-mail, Lisa and Report Card. Like many nerds in Springfield Elementary, Database is a common target for Nelson, Jimbo, Dolph, and Kearney. Database was part of the group of boys who rescued the Springfield Lemon Tree from Shelbyville [3] and was also part of the Pre-teen braves [4]. He is shown to be a comic book geek as he shows up at Comic Book Guy's store. One time, he attended at Homer's Q&A. The other time was when he went to find a Batman action figure for his toy Batmobile. Stan Lee asked him if he wanted an exciting action figure to fit in there, but Database said only Batman fits in there. So, Stan decided to jam The Thing action figure in the toy car. Database cries and declared that Stan broke his Batmobile. But Stan said that he made it better instead of breaking it.

In the DVD commentary for "Lemon of Troy", Matt Groening states that Database is his least favorite recurring character.

Yeardley Smith has suggested that Database should be teamed up with Professor Frink.

Database's father is shown in "Lemon of Troy", but he never speaks and is only in the background. He hasn't been seen since that episode.

In later episodes, Database is occasionally voiced by Tress MacNeille.

Database is loosely based on the androgynous character Pat who was created and performed by Julia Sweeney for Saturday Night Live.

Database with the other kids. 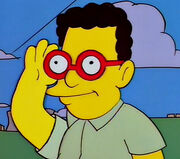 Database, with a possible girlfriend 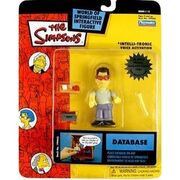 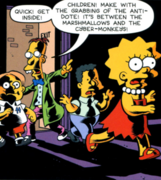 Database with no glasses