"'Scuse Me While I Miss the Sky"

Declan Desmond is an eccentric and skeptical British documentary filmmaker who has directed several films.

American Boneheads: A Day in the Life of Springfield Elementary

Growing Up Springfield is his most notable documentary. It follows the lives of the inhabitants of Springfield, starting when they were in third grade and continuing every eight years. It is similar to Michael Apted’s Up! series.[3]

Other than his three major films in the series Declan has also made many minor films including Do You Want Lies With That? featured in 'Scuse Me While I Miss the Sky, and Ain't No Mountain High: A Blind Man Climbs Everest featured in Springfield Up. Also two other documentaries that he made where mentioned, the two being "Lost Luggage, Shattered Lives", "Up-skirt Dreams" and "Do You Want Lies With That".

Do You Want Lies With That?

A documentary shown in Bart's class about the health risks of Krusty Burger. At the very beginning, Krusty the Clown complains about another documentary trying to make him look bad, hinting that this happens often. Declan Desmond probes this by eating nothing but Krusty Meals for a month. He gets so fat that his cholesterol oozes from his skin, he says "That nothing else can transform him into a morbidly obese toilet busting American" and he'll die if he doesn't have some type of nugget in him every five minutes. Krusty then picks him up in a fork lift saying "You're going to be my breakfast English sausage!" however only Declan's foot is made into a sausage. This gives Bart the idea of giving Nelson a month's supply of Krusty burgers and making him so fat he can't bully anyone.

Desmond is unlocked alongside the Woosterfield Hotel.

Declan is voiced by Eric Idle of Monty Python fame. Declan is also a British character and in Springfield Up Homer calls Declan "Doctor Who"—a reference to his voice actor trying out for the role of the Eighth Doctor in the 1996 Doctor Who movie.

He is based on real British filmmaker David Attenborough.

He was added to The Simpsons: Tapped Out as part of the Level 55 Update. 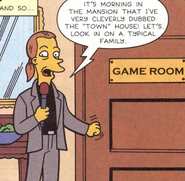 Declan in the comics