A Demogorgon appeared in the show, Odder Stuff

When Lisa went to rescue Milhouse, she went to the Over Under. After fighting a lot of Demogorgons, Homer Simpson came in with a flamethrower and killed the rest. Homer then told Lisa that Mr. Burns had made a portal to the dimension to find monsters.

After realizing they were trapped in the Over Under, a Demogorgon told them that it was a great place to live. The entire Simpson family then moved to the dimension.

A Demogorgon with wings. 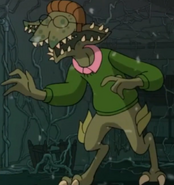