Cletus joined Marge's lawsuit against the Motherloving Sugar Corp. saying he thinks they owe him for what they did to his cousin. He then opens a door to reveal an overweight Dia-Betty, wearing bikini, doing exercise and eating cake at the same time. Marge was grossed out at seeing the sight. She was also seen when she asks Cletus if she can put some of his baby (a bag of sugar) in her coffee. Cletus declines, saying that the doctor told her he was going to take her foot if she ate anymore babies. When Brandine said they're going to have the fanciest wedding in the country she says to open a wall so Dia-Betty can come. Dia-Betty then said "Just bring em to a window so I can pinch 'em". She was later shown to be a member of Big is Beautiful and appears at several of their protests. 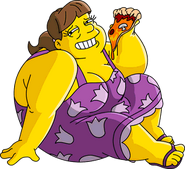