“I don't know what is ‘Milhouse’. I work security for the tour. Dealing with American punks like you counts as my military service, and we know all about you.”
―Dorit

"The Greatest Story Ever D'ohed"

Yael Naim
Dorit is the niece of the tour guide Jakob. She assists him by tracking down and retrieving tourists who leave the group.

Dorit is a highly skilled practitioner of the Israeli martial art of Krav Maga. When Bart ran away from the tour group, she used it to great effect to pursue and subdue him. Bart was surprised (and impressed) that she didn't fight like a girl, "or even like a Milhouse." 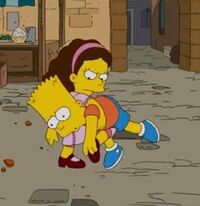 After Dorit finished beating up Bart, she told him that she had had plenty of practice dealing with "punk tourists" like him, and it counted as her military service.

In Israel, service in the Israel Defense Forces is mandatory for most citizens. The term is generally three years for men and two years for women, and service in the IDF reserves is often required after leaving regular service. Also many girls serve as "Krav-Maga" instructors, teaching male infantrymen how to fight close-combat without weapons.

Retrieved from "https://simpsons.fandom.com/wiki/Dorit?oldid=935356"
Community content is available under CC-BY-SA unless otherwise noted.