For others named Doug, see Doug.

Hank Azaria
Doug is one of three nerds that Homer met at Springfield University. He is heavy-set, always wears a cardigan, and wears glasses with thick round lenses. It is implied that he is Jewish in "Mathlete's Feat" where he wears a Hebrew chai necklace.

Homer got Doug and his roommates Benjamin and Gary to play a prank on Springfield A&M, a rival school. They kidnapped A&M's mascot, a pig named Sir Oinks-A-Lot, and brought him back to Springfield University. Homer then got the pig drunk by splitting a case of malt liquor with him, and the pig passed out. Dean Peterson heard the noise from the pig falling over and caught the nerds red-handed with the drunken pig. Due to the influence of Sir Oinks-A-Lot's powerful friends, Peterson was forced to expel the three nerds. Homer, however, got off scot-free because the dean didn't actually catch him with the pig.

Out of guilt, Homer invited the nerds to stay in his home, where they quickly got on the whole family's nerves. Homer ended up confessing everything to the dean and the nerds were re-admitted to school, much to the Simpsons' relief. Doug and his roommates later helped Homer to "Cram like you've never crammed before!" for his Nuclear Physics 101 final. When Homer failed the exam, they changed his grade (albeit reluctantly due to ethical concerns) to an A by hacking into the college's database. Marge then made Homer retake the class, so he could set a good example for the kids by passing the class honestly. While Homer re-took the class, Homer shoved the trio of nerds (along with several other students) into a phone booth, and they later played football while in a Tank.[1] 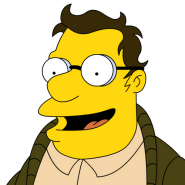 With Benjamin and Gary

A Doug lookalike in Treehouse of Horror VII.