The Duff Blimp is a dirigible with the Duff beer logo on it. It could possibly be based on the real life Goodyear Blimp. The Blimp is usually piloted by Duffman, sometimes other people fly it. Homer once won a ticket to go ride on the Duff Blimp, although he ultimately relinquished it to his friend Barney Gumble to allow Lisa Simpson to participate in a beauty contest to make her feel better about her self-esteem. Barney then proceeded to idiotically drive the Blimp into a radio tower, severely damaging it. Homer predicted that stars would fall from the sky in Thank God It's Doomsday, and the blimp, with Duffman, Krusty, and other celebrities, fell from the sky. He also used it to get a Springfield Isotopes player back together with his wife. Lisa discovers that Sideshow Bob was inside due to Helium, that makes voice more "Squeaky." The blimp helps reunite estranged married couple Buck Mitchell and Tabitha Vixx in the episode Marge and Homer Turn a Couple Play when Homer hijacks the blimp and writes out a message for Buck supposedly from Tabitha. A variant of the blimp was used in A Tree Grows in Springfield which featured Barney Gumble's face on the helm. Homer once gained ownership of it via a set of keys that were formerly owned by a Duffman (it is heavily implied that the means to which he got ownership involved Duffman, while skinnydipping with Homer, committing suicide by drowning due to the latter denying him a drink). 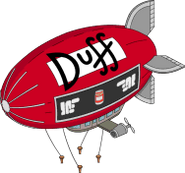 Add a photo to this gallery
Retrieved from "https://simpsons.fandom.com/wiki/Duff_Blimp?oldid=861530"
Community content is available under CC-BY-SA unless otherwise noted.