When Homer was ten, his class had to write either prisoners, or foreigners. He chose a foreigner, because it took longer until the answer came, and that is the way he got to know Eduardo. They sent each other letters about their dreams and desires.

Later they stopped writing to each other. As Eduardo was getting older, he got married with eight wives and has 200 children who now work as artists, doctors or revolution chefs. He also fulfill all his child dreams.

Eduardo actually met Homer years later when Marge wrote him to ask him to come and cure Homer's depression, as he thought he has wasted his life.

Eduardo really arrived and after the primordial shock of Homer's actual appearance, he agreed to help him. When Homer wonders why he is helping him, he asked if he was in love with him, Eduardo says he is in love with the concept of him.

They decided to fulfill all Homer's child dreams from the letters: they drove a fire truck, fought pirates and even performed the battle scene of Captain Kirk and the Gorn from Star Trek by using Comic Book Guy's props.

This helped Homer to feel better, but there was still one dream left: flying like Rocky the Flying Squirrel. Therefore Homer and Eduardo went to do wingsuit flying.

Homer liked it until he hit into the highest building in Springfield and fell down. After that, Eduardo decided to return to Barcelona and Homer accompanies him. 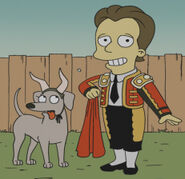 Eduardo as a kid, possibly practicing to be a matador.
Add a photo to this gallery

Retrieved from "https://simpsons.fandom.com/wiki/Eduardo_Barcelona?oldid=657422"
Community content is available under CC-BY-SA unless otherwise noted.