View source
watch 02:24
Wiki Targeted (Entertainment)
Do you like this video?
Play Sound

"The Bart of War"

Harry Shearer (In The Simpson’s)

Eric Cartman is the main character of South Park.

He was seen when Bart and Milhouse were watching his show. An O. J. Simpson riot broke out at Eric's school. His severed head was seen, thus he is presumably dead.[1]

Nelson once dressed as him, while waiting at a bus stop.[2]

During the song "High to Be Loathed", Mr. Burns mentions Eric Cartman, and makes his shadow, among lots of other villains.[3]

Eric Cartman wears a red jacket, yellow mittens, brown pants, and a teal winter hat with a yellow poof ball and yellow lining. He is overweight, has brown hair (usually concealed under his hat), and a double chin.

In South Park, Eric Cartman is portayed as an evil, vicious, angry, selfish, greedy, spoiled, and insane child. He is the most foul-mouthed character in the show. He is also racist and stereotypes almost everyone he sees. The very dark, usually disturbing undertones to his personality often hint at an extreme mental imbalance. Apart from being portrayed as having a general lack of moral responsibility or social conscience, he also seems to take pleasure from others' misfortune and is generally unable to show empathy. Cartman enjoys delivering hate speech, especially to people of the Jewish religion. One character in South Park one summed him up by referring to him as a "fat, racist, self-centered, intolerant, manipulating sociopath".

Eric Cartman is by far the most foul-mouthed, main protagonist of the animated series South Park on Comedy Central, with his closest friends: Stan Marsh, Kyle Broflovski and Kenny McCormick. The character status of Eric Cartman is alive and is voiced by the series co-creator, Trey Parker, in the original real-world TV animated series. 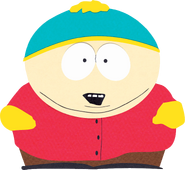 Mr. Burns making Eric's shadow during the song "High to be Loathed" when he identified the young South Park resident as a villain.