Tress MacNeille
Erik [1] is a fifth grader at Springfield Elementary School. He used to be friends with Bart, Ross and Tyler, when and since they were younger.

Bart found out that Marge used to be a member of a group called The Cool Moms. They would take their children on play dates and Erik was one of them.

As Marge and the other moms got back together, so did their children. Erik and the two other kids dared Bart to do crazy things and Bart wanted to split them up again, which they eventually did.[2] Erik has yet to reappear. 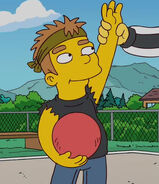 Bart questions Erik over how he got that scar.

Erik about to fight Bart.