Everybody Hates Ned Flanders was an Emmy-nominated song from the episode "Dude, Where's My Ranch?". In the episode, it was written by Homer Simpson. It was supposed to be a Christmas carol, but when Flanders interrupted Homer's writing of it, he chose to make a hate song about him. After hearing it in Moe's Tavern, guest star David Byrne decided to make it into a CD and have it play all over Springfield on radios, church choirs and karaoke bars. However, after hearing several knock-offs, Homer gives up on the song. The music was written by Alf Clausen and Ken Keeler and the lyrics by Ian Maxtone-Graham and Keeler. It is part of the seventeenth track on the album The Simpsons: Testify. It was nominated for an Emmy award for Outstanding Individual Achievement in Music and Lyrics in 2003. It lost to "Aren't They All Our Children" from the television special The Concert for World Children's Day.

For the introduction lyrics see Flanders is His Name.

David Byrne:
And I used to wrestle under the name El Diablo (The Devil).

Lenny:
I thought that was Phillip Glass.

Homer:
Hey, mister, if you like my song, do you wanna buy a tape? It's already rewound.

David Byrne:
No, thank you. But I would like to sing it with you, and produce it.

Homer:
His name is Ned!

Homer:
It's a stupid name!
He's worse than Frankenstein
Or Dr. No!

David Byrne:
You can't upset him even slightly,
He just smiles and nods politely,
Then goes home and worships nightly,
His Leftorium is an emporium of woe!

Homer:
His wife is dead!
Everybody hates that stupid jerk!

Homer and David Byrne: (Ned Flanders also singing along to the radio in his car).
If you despise polite left-handers,
Then I doubt you'll like Ned Flanders
Or his creepy little offspring, Rod and Todd.

Apu:
His name is Ned!

Apu:
He is so white bread!

Homer and Church Choir (including Miss Hoover and Dr. Hibbert):
The smiling mustached geek who walks with God!

"Sung" by William Shatner (guest voice Maurice LaMarche). This is a parody of Shatner's infamous interpretation of "Rocket Man."

Marge:
Another cover?! My God, let it die!

(Homer turns off the radio)

Marge:
I am so sick of that song!

Homer:
Ugh, me, too! I've come to hate my own creation! Now I know how God feels.

Homer:
This dude ranch is gonna be great. A whole week without hearing that stupid song.

David Byrne:
You won't think it's stupid when you hear the Extended Salsa Mix!

(gets out of the car and starts dancing on the hood)

Marge:
Watch it, Mr. Byrne! You'll slip on the Simoniz!

(Byrne slips on the Simoniz and lands in Moe's car.)

David Byrne:
Can you take me to the hospital?

Moe:
Yeah, no problem.
(they pass the hospital)
David Byrne:
Wasn't that the hospital?
Moe:
Uh...did you ever see the movie Misery?
David Byrne:
Actually, no.
Moe:
Then this'll all be new to you.
(Moe drives off to a mysterious location) 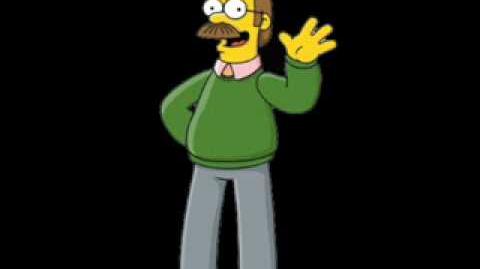 Retrieved from "https://simpsons.fandom.com/wiki/Everybody_Hates_Ned_Flanders?oldid=927439"
Community content is available under CC-BY-SA unless otherwise noted.