This is about the original Fat Tony. For the Fat Tony who debuted in "Donnie Fatso," please see Fit Fat Tony.

Marion Anthony D'Amico, also known as William Williams -- or most commonly, "Fat Tony" -- was the Springfield mob boss. He has been behind several of Springfield's criminal enterprises. His rackets included illegal gambling, cigarette smuggling, bootlegging, fraud and selling false IDs. He had also been seen bribing and making secret deals with Mayor Quimby.

Fat Tony has a son, Michael, whom he used to drive to or from school. He was a widower and said his wife, "was whacked, by natural causes." Fat Tony and his associates conducted business and socialized in the Legitimate Businessman's Social Club.

Fat Tony was born Marion Anthony D'Amico, in Brooklyn, New York, where he was very poor. When his parents were evicted, he ran away seeing they couldn't offer him any more. He would usually sleep at a friend's house, a supermarket (he would sneak in when it was closed), vacant buildings, or on the streets. Finally, a young man in the mafia found him sleeping on a bench in Central Park and got him a job in the mafia. This man was named Salvatore Tessio; he had taught Tony everything. One night when Tony was 20 years old, Sal was found killed. Tony learned to fend for himself after that and, using what Sal taught him, he worked his way up from a henchmen to a capo. Eventually, he married Anna Maria D'Amico and had a son named Michael D'Amico. Unfortunately, an enemy tried to shoot Tony, and Anne Maria protected him by jumping in front and later dying.

Fat Tony is a widower. He had a wife named Anna Maria with her grave in Springfield Cemetery who was "whacked by natural causes." Tony has a son named Michael, whom he planned to have follow in his footsteps as the leader of the Springfield mob. [1] Following his death, it was revealed that he had a cousin called Fit Tony, who took Fat Tony's place running the Springfield mob.[2]

In Donnie Fatso, Fat Tony collapsed and died in Homer's arms. His death was most likely caused by a heart attack or cardiac arrest.

Originally, Tony was going to be voiced by Hank Azaria. However, since Fat Tony wasn't a very good drawing, Groening decided to make a "Special Guest Voice" do him. Groening chose Joe Mantegna. In one DVD commentary, it is stated that Mr. Mantegna is so enamored with the character that he has forbidden to allow anyone else to voice Fat Tony; he even voiced him when the script only called for a couple of grunts ("Sex, Pies, and Idiot Scrapes"). However, this didn't keep Phil Hartman from filling in for him on one occasion ("A Fish Called Selma").[3]

Fat Tony is a pastiche of mobsters from movies and dramas, especially The Godfather franchise (and in later seasons The Sopranos). His nickname may be a reference to "Black Tony", the Don of the fictional Stracci family in The Godfather.

"Moe Baby Blues" featured several interesting references relating to Fat Tony. To entertain his subordinates, Fat Tony puts an orange slice in his mouth in imitation of Don Corleone from The Godfather. Minutes later, Fat Tony responds to an emotional scene by saying "I haven't cried this much since I paid to see Godfather III" (in which Mantegna played the character Joey Zasa, one of the inspirations for Fat Tony).

His son's name is a reference to Michael Corleone.

On several occasions, Fat Tony has said something that begins as ominous mafia language, only to be proven innocent; one example is "We are going for a ride... By which I mean the carpool" and "Now who's ready to sleep with da fishes?... Because I brought this Finding Nemo comforter!" This also led to some confusion among his fellow mafia members, such as the time when Troy McClure was involved in a scandal involving a sexual attraction to fishes, and he told his fellow gang members that he was "sleeping with the fishes", causing them to misinterpret the meaning to Troy having died when he was actually meaning that McClure was literally sleeping with the fishes.

His house also strongly resembles that of Tony Montana in the movie Scarface. 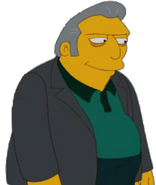 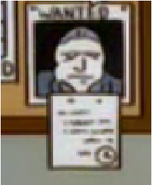 Retrieved from "https://simpsons.fandom.com/wiki/Fat_Tony?oldid=649469"
Community content is available under CC-BY-SA unless otherwise noted.