Ralph won't 'morph' if you squeeze him hard enough.

“There's something bothering me about this place...
...I know! This lesbian bar doesn't have a fire exit. Enjoy your death trap, ladies.”
―Homer Simpson in the She-She Lounge

"Fear of Flying" is the eleventh episode of Season 6.

The family try to go on a vacation with Homer's free airline tickets (after Homer is banned from Moe's Tavern), but soon discover that Marge is afraid of flying. On Lisa's advice, Marge visits a mentor to cure her seemingly unexplained fear.

When Homer pulls a harmless and quite lame prank on Moe, he gets booed for it and is banned from the bar for life, ironically after laughing off life-threatening ones that Lenny, Carl and Barney pull on him. Homer therefore visits all the other bars in Springfield (including Cheers), but finds none of them to his liking.

The first bar he visits he is immediately asked to leave without a fus, a request that he quickly follows (this being due to him not being dressed smartly). The next bar he visits is "Cheers" and thinking it's a nice friendly place since he wasn't immediately asked to leave pulls up a seat at a table. However after another customer mentions that there would be karaoke he runs back out of the bar. The "She-She Lounge" is where he next visits however this is a lesbian bar and again he walks out.

Meanwhile back at Moe's Bar a member of the public who looks like Homer but wears a suit and top hat plus a mustache walks into the bar asking for a drink, believing that it's Homer in disguise he is told to get out. The person not knowing who this Homer person is tells them that his name is Guy Incognito. Unfortunately for Guy everyone in the bar beats him up and he is thrown out of the door unconscious. Homer then walks past Guy spotting that the man looks exactly like him and must be his double. The last bar in Springfield is "The Little Black Box", this however is a private bar only for airline pilots so if they wouldn't let him in he would have to give up drinking. He is asked if he is a pilot since he wasn't wearing a uniform and lies saying he stored it in the overhead locker, he is therefore lent a uniform to wear. Unfortunately for Homer after putting on the uniform before he can even get a drink a member of airport staff says that a pilot is needed and it had to be one that wasn't drunk, being the only person who wasn't drunk. Homer tries to tell them that he is really only wearing an outfit to drink at the bar but they laugh believing that he was making a joke and Homer is placed into the cockpit of a plane. Homer is introduced to Alan his co-pilot and pretends to try and let Alan do most of the work claiming he is ready, Alan however gives Homer a suspicious look so Homer realizes he has no choice but to fly the plane. First he accidentally turns off the oxygen supply but Alan turns it back on claiming they need it to live, he then wrecks the plane by accidentally raising the stationary plane's landing gear. The airport staff realize that this incident will make headline news and make them a laughing stock if word about it got out so in exchange for Homer's silence regarding the incident and the mistake they made, the carrier (Crazy Clown Airlines) offers Homer and his family a trip to anywhere in the continental United States (excluding Alaska and Hawaii, the "Freak States").

Homer eagerly tells his family about their free trip, and everyone seems overjoyed, except Marge, who freaks out on the plane, revealing to Homer that she has a fear of flying, and demands to be let off. After the traumatic incident, Marge begins to show bizarre behavior, which Lisa sees as suppressing her fear. Homer suggests ignoring Marge's behavior, but this soon reaches the point where he takes her advice and Marge goes to a counselor to deal with her problems. Homer accepts but is opposed to this, because he thinks the shrink will tell her to break up with him, which is confirmed to the audience when the counselor writes down "husband" in large letters on her pad and underlines it. Through the counselor, Marge begins to explore more about her past. The counselor has Marge remember one of her earliest traumatic experiences, causing Marge to remember her first day of school. After Patty and Selma upset her about scary fears she could expect, Marge was later ridiculed on the bus for liking The Monkees.

Sometime afterward, Marge relates about a dream in which she played the Mother from the TV show "Lost in Space", with Homer as Dr. Smith, and Lisa as Robby the Robot. At the end of the dream, as a spacecraft lifts off, Marge remarks how she yelled for her father not to leave. When the psychiatrist tries to press Marge for more information, Marge is hesitant and tries to change the conversation. After some time, Marge relents, and explains how she said goodbye to her father before he boarded a plane, while her Mother explained that he was a pilot. Wanting to see her father fly, Marge eagerly entered the plane, only to see that her father was actually a steward (or to her, a "stewardess").

The memories of the incident upset Marge, but the counselor comforts her with the suggestion that Mr. Bouvier could now be considered a pioneer who helped make male flight attendants common. Even though the counselor feels this is the root of her mental issues, Marge also remembers other things (a relative trying to feed her as a baby and getting food in her eye, playing as a child with a small airplane that catches fire, her and her mother being attacked by a plane in a cornfield); the counselor dismisses these additional memories, claiming that they are "all a rich tapestry". She is about to tell Marge about the true problem being her husband but Homer pulls her out of the session before she can.

Cured of her anxiety, she finally gets on a plane filled with confidence; this turns to annoyance as the plane overshoots the runway and lands in the sea.

In its original American broadcast, "Fear of Flying" finished 48th (tied with Dateline NBC) in the ratings for the week of December 12 to December 18, 1994, with a Nielsen rating of 9.6. The episode was the third highest rated show on the Fox network that week, beaten only by Beverly Hills, 90210, and Married... With Children.

Since airing, the episode has received many positive reviews from fans and television critics. Warren Martyn and Adrian Wood, the authors of the book I Can't Believe It's a Bigger and Better Updated Unofficial Simpsons Guide, said it was "a good Marge-centric episode with plenty of clever set pieces - the tributes to Cheers and Lost in Space are fantastic", and noted that "Marge's father looks suspiciously like Moe". 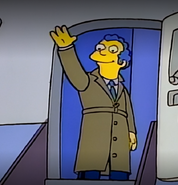 Clancy boarding the plane as a "pilot".