As with any Church, the main service to the community is their Sunday Service, which most Springfieldians attend. However, they also have offered other services, such as a help line, marriage retreats, outings, a thrift shop, picnic and Christian bands.

The main building of the church is laid out with pews going down until the altar, where the Reverend preaches. At the end of each session, a dish is passed round for donations. Lack of donations have led to the church being bought by Mr. Burns on two occasions.[1][2] The Church also ran a Sunday School, attended by many local children and taught by Ms. Albright.[3][4] The church also has an office[2] and a room in which the church council met.[1]

The stained glass windows have varied throughout the Church's history, originally being based on St. Eleutherius, St. Bartholomew, St. Lucian and St. Donickus. They appeared in a vision that Reverend Lovejoy had once.[5] Later, Bart and Homer accidentally destroyed the Church using a rocket they made with the help of Gary, Doug and Benjamin. Later on, Bart smashed the windows again, this time of the apostles. The Church cut corners by letting Lenny do the replacement windows, but ended up with the characters of The Drew Carey Show. Burns sponsored the church and replaced them with himself doing heroic actions.[2]

The church was also destroyed by a Jetpack after Chief Wiggum "stole" it from an army general who originally ordered it. They shot Wiggum down, making the jetpack spin out of control and hit the church, which made it catch fire. It was later rebuilt because the church congregation gained enough money to do so by gambling. [6]

The church has twice come under Charles Montgomery Burns' control. The first time occurred due to Bart and Homer accidentally destroying the Church using a rocket they made with the help of Gary, Doug and Benjamin to beat the Flanders' rocket. Nibbles the Hamster, the pilot, lost control and ejected, sending the rocket on a collision course into the Church. The Church Council got together and realized that they couldn't afford to repair the damage. Mr. Burns offered to repair the church in return for running the church. The council, though reluctant, was left without a choice and Lindsey Naegle was left in charge of renovations. Lindsay and Burns commercialized the church by putting up advertisements inside the church, include a neon Jesus and a Lard Lad statue. Inside there were also impulse stalls, such as a money changer and a novelty Last Supper cutout picture, which gave Church goers a chance to be Jesus. The seats were upgraded to extra large and a jumbotron was installed with a "God Cam." The sermons were also affected, which included advertisements and commercial sermon takers. The commercialization of the Church service led to Lisa converting to Buddhism.[1]

The second time was again due to money shortages, with Mr. Burns sponsoring the Church in a scheme to help his book sales. He replaced the stained glass windows with himself and added taco bars to the pews. As well as this, he gradually takes over sermons, showing commercials for the power plant and other advertisements. He also replaced the Bible with his autobiography, planning on turning Church into a book club. This caused Ned Flanders to leave the church. Burns then developed a plan to become Pope and unlock the Vatican's riches, not realizing that the church was Protestant and not Catholic.

The church once fell into the ownership of Homer Simpson, who won the deed to the Church and converted the church into his personal home, desecrating it in the process.[7]

The church survived the Trappuccino incident and did not suffer any severe damage.[8]

The church still remained at odds with Catholicism (even though they stopped feuding with each other), its more devout members needing to have their hands re-blessed after shaking with a Catholic. Reverend Lovejoy also has a rivalry with a local Episcopal church[9] and has engaged in a brawl with a Catholic priest.[10] Native religions, for instance those which are found in the South Pacific, are seen as inferior, and missionary activity is employed to ridicule away the beliefs of native peoples.[11] The church also has enemies on a social level, including monogamous gays and stem cells.

The church has been known to host memorial services (e.g. Green Day, The Simpsons Movie) and funerals (e.g. Chip Davis, "Four Regrettings and a Funeral").

The unusually specific name of the Church is a parody of Protestant reformed churches branching off into other denominations and movements. 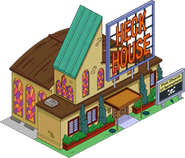 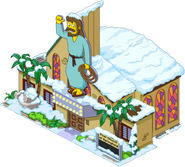 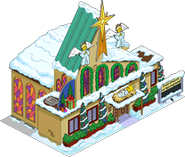 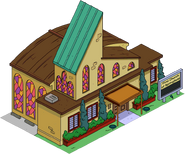